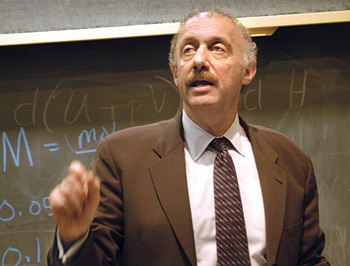 It may be easier to find an atheist in a foxhole than to find a Constitutional hardliner in a fiscal crisis. A pair of legal scholars sparring about the constitutional ramifications of the New Deal found common ground at Brown September 17. Brought to campus by the student-run Janus Forum, which pits politically divergent thinkers against one another other, New York University's Samuel Issacharoff (right) and Richard Epstein, of the University of Chicago, agreed that the United States needed to rescue Fannie Mae, Freddie Mac, a fleet of sinking banks, and insurance giant A.I.G. "If you allow a bank to fail, it will bring down all the other banks with a velocity the likes of which you've never seen before," libertarian Epstein said. "You can fault the way the banks got into this, but not the bailout."