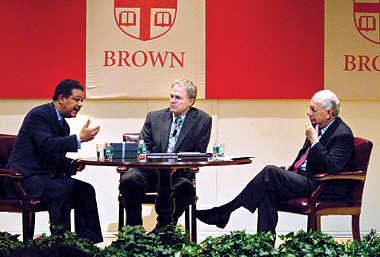 Ellen Johnson Sirleaf was not the only national president to visit Brown this fall. On September 26, Leonel Fernandez, president of the Dominican Republic, sat down at the Watson Institute with associate professor of history James Green, who until recently directed the institute's Center for Latin American Studies, and former Chilean president and now professor-at-large Ricardo Lagos Escobar. During the event, a Stephen A. Ogden Jr. '60 Memorial Lecture on International Affairs, Fernandez argued that poverty and unemployment threaten democracy in the Dominican Republic. He and Lagos criticized unregulated international markets for their indifference to such issues. Fernandez also argued for strong trade ties to the United States. "Free trade with the U.S. means having access to the most important market in the world," he said.