The Art of War

Full Battle Rattle, produced and directed by Tony Gerber '86 and Jesse Moss. Airing on the National Geographic Channel in early 2009. For a schedule of local screenings, see www.fullbattlerattlemovie.com. 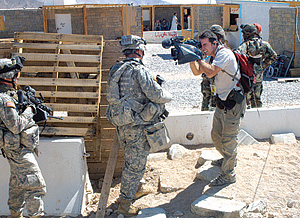 Tony Gerber films soldiers training before their deployment in Iraq.
Where southern California's Mojave desert abuts Death Valley, the U.S. Army has built a replica of Iraq. Known as The Box, it includes nineteen villages spread over 1,200 square miles, each one made up to simulate as closely as possible the experiences that U.S. troops are likely to encounter when they're deployed to Iraq. Makeup artists splatter fake blood on real Iraqi refugees who play the part of wounded Iraqi citizens. Hollywood pyrotechnics experts trigger the sound of explosions and release plumes of smoke. Riots erupt. After a soldier wanders off from his platoon and is kidnapped, his comrades watch him being killed on TV by triumphant militants.

In August 2006, documentary filmmaker Tony Gerber spent three weeks in The Box with the 4-1 Cav, the Fourth Brigade of the First Cavalry, before the unit left for Iraq. Gerber and his fellow director, Jesse Moss, followed the platoon, which is based at Fort Bliss, Texas, as it sought to put down an insurrection in the staged village of Medina Wasl and worked to win the allegiance of its few dozen inhabitants. The result is the documentary Full Battle Rattle, which premiered at the 2008 Berlin Film Festival, opened at New York City's Film Forum in July to critical raves, and has been playing theaters and festivals around the world ever since.

Watching Full Battle Rattle can be an eerie, disquieting experience. Some of the simulated battles in the movie seem straightout of Hollywood. Others seem uncannily real. The boundary between reality and fiction doesn't so much blur as completely dissolve, and you are reminded how much our experience of violence is filtered for us by television or the movies. "We live in an age of smoke and mirrors,"says Gerber, who is married to playwright Lynn Nottage '86. "It's becoming increasingly difficult to appreciate what's real." 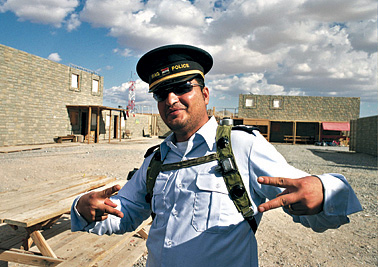 Tony Gerber
Shot in California, Full Battle Rattle takes you into a simulated Iraqi war zone where reality and fantasy converge.
The human story behind the film is gripping. Lt. Col. Robert McLaughlin, as the unit's commander, is determined to suppress the chaos, to make peace between the local Shia and Sunni, and to protect his soldiers. Meanwhile, some of his troops, who learn what hummus is for the first time, are asked to become familiar with the differences among Iraq's warring tribes or to calm a woman whose child was just blown up in an explosion. It's an overwhelming burden, and you leave the film with a gritty appreciation for the difficulties U.S. troops face daily in Iraq. One of the film's most astonishing moments, infact, occurs when the unflappable McLaughlin experiences a crisis of confidence after discovering that much of what he assumes about the battle he is fighting is false.

Gerber has mixed feelings about the training camp. "If I had a son bound for Iraq and I couldn't stop him," he says, "I would hope he would go through this training." Their work at The Box, he believes, does help soldiers become sensitive to the culture they are about to be immersed in, and the fighting enables them to hone their urban-warfare skills. But at times he was struck by the preposterousness of the situation. "It's a theatrical enterprise going on out there," he says."You have essentially a screenwriter, special-effects technicians, and actors simulating a war."

Gerber also notes the irony of all this cultural-awareness training in service of war. "What's happened is that culture has become weaponized," he says. "It's the notion that if you understand a little bit about the enemy's culture you can deploy it as a weapon."

Reader Responses to The Art of War