One of the best things about living in Rochester, New York, is that, thanks to the Genesee Waterways Center (GWC), for a small fee, anyone can rent a kayak or canoe and spend the day paddling on the Genesee River. Some residents use the river for sculling and rowing, and some train to compete in the annual regatta. The GWC also manages old Lock 32, a spillway of the Erie Canal that has been turned into New York State's only manmade whitewater course. According to the GWC's website, "It is a dynamic park that draws people of all ages to the water!" 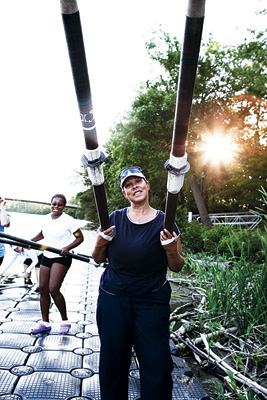 But not people of all skin colors. Even though the GWC is in the heart of the city and blacks and Hispanics live close by, most of them see the park as a playground for white people with money. As a result, it remains a white oasis, and that doesn't sit well with Lydia Boddie-Rice.

In 2006, Boddie-Rice started Cross Currents, a crew team for people of color. Its members are mostly African Americans and Hispanics, but there are a few Pacific Islanders and Indonesians as well. And they're all starting to get noticed. After competing in numerous regattas in the region, Cross Currents won a silver medal at the Pittsford Regatta last May. Thanks to successes like this, Boddie-Rice hopes Cross Currents will change the perception of minorities that crew is a sport for the boarding-school elite. "I'm pretty proud of what we've built," she says. "It's just a visual spectacle to see a number of people with different ethnic backgrounds out there rowing."

Still, creating and maintaining Cross Currents has been challenging. After all, rowing can be costly. Housing your boat, hiring coaches, entering races, and taking classes all take money. Rowing also requires a substantial time commitment. Boddie-Rice's squad practices for up to two-and-a-half hours one to three times a week. And for urban minorities in the Northeast, says Boddie-Rice, water sports are not familiar fare. "There are still people of color who do not know how to swim or who want nothing to do with the water," she says. "That is not something we thought we'd encounter."

Boddie-Rice first became interested in rowing at Brown, though as an observer content to watch her classmates participate in what she found to be an amazing sport. "It looks very beautiful and synchronized when everyone is rowing together," she says. Years later, when her daughter went off to college and took up rowing, Mom became inspired to try it too. "It was another form of fitness," says Boddie-Rice, a former dancer.

She assembled her team by talking up crew at local high schools as often as she could. She also spoke on television news programs, and placed ads on radio shows. It helped that as the manager of public affairs at the Rochester Gas & Electric Corporation she knew a lot about marketing. It also helped that RG&E teamed up with the city of Rochester, several New York state legislators, and the GWC to give Cross Currents $50,000 to get started.

Slowly but surely people of color started showing up at the river, at first just a handful but soon a few dozen, all of them willing to give the team's training program a try. The rigor and schedule of the training weeded out some of the recruits so that today Cross Currents has about 16 core members, enough to staff several four- or eight-person crews. "It's going to take time," Boddie-Rice says. "We really had some fantasies [that] you could step into a boat and all of sudden you'd be at a level where you could compete. It's a lot of hard work."

The team got its first boat last year, an eight-person Vespoli shell that they named the Joule as a way of thanking RG&E for its support (a joule is a unit of energy). During the warmer months, the Cross Currents team can be seen out on the Genesee River rowing side-by-side with the other, mostly white, teams. Boddie-Rice hopes that the sight will eventually inspire other inner-city residents to come forward and pick up an oar.

Reader Responses to Unlocking the Oars