The text message spread like a virus first thing in the morning. Cometo the Green, it said, if Obama wins. And shortly after 11 p.m., afterthe political reporters had announced Obama as the forty-fourthPresident of the United States, the students streamed out of theirdorms. Hundreds gathered under the bare elms, dancing, banging ondrums, and filling the night air with cheers. 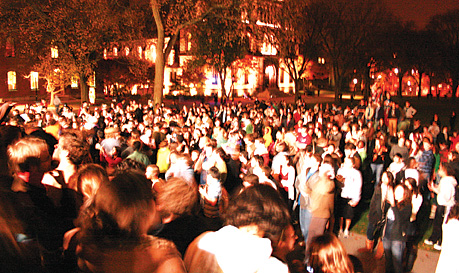 And then a strange thing happened—strange, that is, if youbelieve the conventional wisdom that college campuses in general, andBrown's in particular, have become hotbeds of left-leaning,blame-America-first cynics. On election night singing could be heard onthe College Green, not the chanting of the latest popular hit, or evenof the "Alma Mater," but the words and music of "The Star SpangledBanner."

The students thensang "God Bless America," and even Lee Greenwood's "God Bless theU.S.A." Some waved U.S. flags as they sang; others wrapped themselvesin the Stars and Stripes.

"It was the first time in our lives we felt proud to be American,"Sarah Schoenbrun '09 later recalled. Deanna Saunders '11 noted, "Myfriend said she'd never sung 'The Star Spangled Banner' before. Butthat night she sang it like she really meant it." 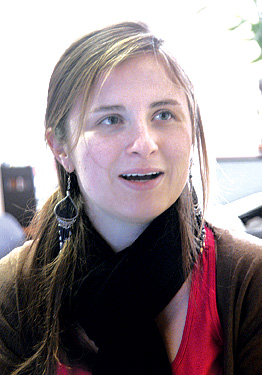 Frank Mullin
"It was the first time in our lives we felt proud to be American," Sara Schoenbrun '09 says.
Given the excitement so many young voters felt for Barack Obama,will his election mark a return of patriotism to campus? Elated by theelection of the nation's first black President—someone who, asSchoenbrun puts it, "represents our generation and shares ourvalues"—students feel proud to be Americans and want the world to knowit. Elliott Gorn, a professor of American history, says his studentshave become "hopeful, committed, engaged, less lethargic. Certainlythey seem less negative about America."

One day a few weeks after the election, Kaitlyn Scott '10 sat in theBlue Room eating her lunch. She was wearing a T-shirt with an Americanflag emblazoned on the front. "I haven't taken this out of the drawerin years," she said, "and finally I feel like I can wear it again."

The only presidents today's Brown students have known are Bill Clintonand George W. Bush. Politics in their lifetime has gone from affairswith White House interns and shady Arkansas land deals to war andterrorism, both of which felt beyond their control. Deborah Saint-Vil'10 says that many students, faced with this grim reality, becameapathetic. Others, she says, grew disgusted.

"I kind of felt the country was in a declining state," says AlexandraChemla '09. "Everything we used to value was being taken over. This hasreinstated my faith in the country."

Some students also believe that Obama has reclaimed a broader definition of patriotism. Last April a CBS/New York Timespoll found that only 29 percent of registered voters described Obama as"very patriotic." Among young voters, he fared slightly better—39percent said Obama was very patriotic while 57 percent described JohnMcCain that way. Two months later Obama delivered what's become knownas his Patriotism Speech, in which he said, "For me, as for mostAmericans, patriotism starts as a gut instinct, a loyalty and love forcountry rooted in my earliest memories‚¶ It is also loyalty toAmerica's ideals —ideals for which anyone can sacrifice, or defend, orgive their last full measure of devotion." 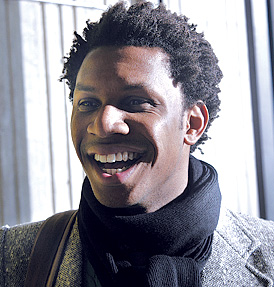 Frank Mullin
"I have hope that now [America] can live up to its promise," Robert Smith '09 says.

According to Luis Cisneros '10, Obama's speech reminded people thatpatriotism is not just about bearing arms to defend the nation. "This isn't going to translate into increased military recruitment," he says."For Obama, patriotism means public service."

How long will this patriotic revival last? Many students have notforgotten the darker sides of U.S. history. Robert Smith '09, who isgay and African-American, says he is under no illusion that Obama canerase the sins of America's past. "We have a 240-year history," hesays. "He's only one man."

But Smith says he's definitely more optimistic about the country'sfuture than he's been in a long time. "America is a great idea," hesays. "But the way it's been executed, it's largely done more damagethan good. I have hope that now it can live up to its promise."