Roadhouse Warrior
Chef Duskie Estes ’90 is a whirling dervish in the kitchen.

Duskie Estes came to cooking early. As a child in San Francisco, she made tiny cakes in her Easy-Bake oven, and her father introduced her to the city's eclectic cuisine during their weekly Wednesday night dinner dates. Her parents and stepparents—all academics—didn't expect Estes to become a chef, though. "She had to break the mold to do what she's done," says Sara Daley '91, a longtime friend who worked with her in Providence restaurants while they were students. 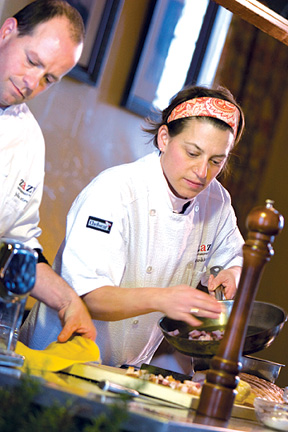 Today Estes and her husband, John Stewart, own two restaurants, Zazu and Bovolo, in Sonoma County, California. They serve casual Italian dishes with an American accent, reveling in seasonal, local ingredients. The couple and their two children live close by on a small farm where they raise chickens and grow figs and Meyer lemons, among other things. A pair of Babydoll sheep named Pickles and Pancake fertilize and weed their vineyard, which produces a red wine called Holdredge Schiopettino MacBryde Vineyard, available only at Zazu and at the internationally renowned restaurant French Laundry.

Estes, who wears a sparkly nose ring, takes a hearty, irreverent approach to life and food. At Zazu you can just as easily order tomato soup and a grilled cheese sandwich (made with local cheese, of course) as you can tuck into a plate of red-wine-braised rabbit paired with mushroom risotto and rapini. In a Food Network Challenge mac 'n' cheese cook-off last spring, she served one made with truffled sheep's cheese and cauliflower—and topped with bacon. "Duskie is a playful person with an incredible palate," says Daley. "She understands both the thrill and the value of making her food accessible."

In Sonoma's foodie culture, Estes's food was an immediate hit. The San Francisco Chronicle named Zazu one of the top-ten new restaurants of 2002. Bon Appetit called it "superb ... unpretentious, wine savvy ... retro-hip." In 2005 the couple followed that success with Bovolo, a casual, family-oriented restaurant whose motto is "slow food fast." For Estes, food is a way to build community—communities of farmers, cooks, and diners.

Estes got her professional cooking start as a student. After taking time off to attend culinary school, she returned to Brown and spent her weekend nights sweating, scrambling, and whipping up individual batches of ice cream to order at the Providence restaurant duo Al Forno/Lucky's. "There were timers going off left and right," she recalls. "It was wild, and I loved it."

Age hasn't slowed her. "I like to call her the Tasmanian devil in the kitchen," says Zoi Antonitsas, a chef at Zazu. "She's super high energy, spinning around all the time."

After graduation, Estes interned at a public defender's office in Washington, D.C., but was happiest sidelining as a pantry chef at Twenty-One Federal. Over the next few years, she hopped from city to city, cooking in San Francisco and Providence, working as a chef on a Nantucket yacht, and catering for a Grateful Dead tour of Colorado. She flipped pancakes and omelets, butchered rabbits and lobsters, and fought her way up to positions often held only by men. When she moved to Seattle in 1994 she befriended chef Tom Douglas and worked as corporate sous chef for three of his award-winning local restaurants. She also helped him write Seattle Kitchen, which won a James Beard cookbook award in 2001.

Estes met Stewart in 1996 while she was executive chef at Douglas's Palace Kitchen, a meat-driven restaurant that challenged her two decades of vegetarianism. "I didn't eat meat for twenty-two years," she jokes. "And now I'm married to a man who makes salumi and has a pig tattooed on his arm." The couple bought the Santa Rosa property that would become Zazu in 2001, when their first child, Brydie, was three weeks old. Estes hadn't expected to move back to California, but the vibrant farm community and the roadhouse dining room beckoned.

Giving a tour of Zazu's sun-dappled kitchen one morning this September, Estes paused at a small metal freezer and pulled out a container of gelato: fromage blanc, one of many flavors that she and Stewart make from scratch. It was smooth and rich with the faint twang of yogurt. Remembering her college nights whipping individual batches of ice cream in Al Forno's kitchen, she laughed and said wryly, "We don't spin our ice cream to order here." Apparently even dervishes have their limits.

For their Sonoma County, California, restaurants, Zazu and Bovolo, Duskie Estes '90 and her husband, John Stewart, make their own bacon from heritage pork that is antibiotic- and hormone-free and free range. Estes writes: "We like to highlight it in everything. We can ship it to you from our restaurants—call us at (707) 523-4814—or you can order other great bacons from another Brown alum, Dan Philips '81, at www.gratefulpalate.com. Quality bacon makes or breaks this dish! Carbonara gets its name from carbon; that is the fresh black pepper in the dish. You can make the pasta (see below) or use a dried fettucini or farfallini noodle."

In a bowl, combine flour, eggs, and oil. Knead, wrap in plastic and let rest at least 1/2 hour. Roll out in pasta machine three times at each setting, folding it each time (this gives it the tooth). Bring to desired thickness (this depends on the machine, usually two notches above the thinnest setting). At the desired thickness, roll it through twice without any folding (that sets the thickness) and cut with the tagliatelle cutter.

Bring a large pot of salted water to a boil. In a sauté pan on medium-high heat, cook the bacon until crisp, about 4 minutes. Cook the pasta until done, about 4 minutes. Halfway through the cooking, add the asparagus.

Meanwhile, in a bowl, combine the eggs with the Parmesan, salt, and pepper.

Strain the pasta, reserving 1/2 cup of the pasta water for the sauce. Add the hot pasta and asparagus, some of its water, and the hot bacon and its rendered fat to the egg and cheese. With tongs toss and add pasta water to desired consistency. Season to taste with salt and pepper. It is important that the pasta and the bacon be hot because they are cooking the egg and thickening the sauce, and it's also important to work quickly so you don't overcook and scramble the eggs. Plate up into pasta bowls and garnish with more Parmesan cheese.

By Duskie Estes and John Stewart of Zazu and Bovolo restaurants and farm.

Advancing knowledge and understanding in the service of society
First Person