At the start of Marilynne Robinson's third novel, Home, thirty-eight-year-old Glory Boughton has returned to Gilead, Iowa, to care for her father, a retired Presbyterian minister. Glory returns not in glory, however, but in shame; she has given her youth and much of her teacher's salary to a fiancé who strung her along but turned out to be a louse—a married louse. Moving back, she feels humiliated, and beneath her gentle manner and reflexive kindness she is angry. 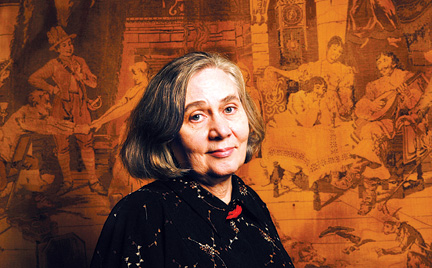 Ulf Andersen/Getty Images
In her latest novel, Marilynne Robinson reexamines the crimes of Jack Boughton, but from a sister's perspective.
So when her prodigal brother, Jack, sends word that he is coming home after a twenty-year absence—he shunned even his mother's funeral—Glory is torn. The eldest of the large Boughton tribe, Jack always felt apart from his family, and as he'd reached adulthood his childhood pranks and teenage thievery, drinking, and vandalism had given way to graver crimes. When it became public that he'd impregnated an impoverished girl, he fled for good, leaving his parents and Glory, the youngest, to shoulder his disgrace and to help care for the baby and her mother.

Questions of guilt and forgiveness are at the heart of both Gilead, Robinson's earlier novel, which won the Pulitzer Prize for fiction in 2005, and Home, a finalist for the National Book Award this fall. Home is not a sequel to Gilead; instead of extending the narrative, it goes deeper into it, exploring the same events through different eyes. In Gilead, Jack Boughton's misdeeds are described by Rev. John Ames, Robert Boughton's closest friend and theological debate partner, who struggles to reconcile his Christian ethics with his acute wariness of his namesake, Jack: John Ames Boughton. In Home, we see Jack through the eyes of Glory, the baby sister he persists in calling Pigtails.

The Jack Boughton who returns to Gilead in Home has served time in prison and battled with alcoholism, with mixed success; he arrives hungover. Glory cleans her brother up, but the only comfort she takes in his return is to see the relief and joy it brings her father. Through much of the novel, Glory and Jack circle each other politely, performing small kindnesses and keeping their distance. Over time, Glory begins to trust Jack a little, and to win his trust as well. She never confides the scope of her hurt (Jack refers to her ex-fiancé as Old Love Letters), and Jack never tells her the whole truth about Della, the woman who loved him and kept him sober for nearly a decade. When Jack's letters to Della are returned unopened, Glory sits up with him at the kitchen table, waiting out the minutes until the bars have closed and he is safe from his devils.

The story is set in the 1950s, and Jack, who knows his Marx as well as his Bible, is preoccupied with the Civil Rights movement. He challenges his father to make sense of young Emmett Till's murder in Mississippi, but Boughton is annoyed; he wishes the colored people would stop provoking violence. At such times, Jack's activist atheism feels more Christlike than his father's passive piety.

In an interview that ran in The Paris Review last fall, Robinson was asked if she thought of herself as a religious writer. "I don't like categories like religious and not religious," she answered. "As soon as religion draws a line around itself it becomes falsified. It seems to me that anything that is written compassionately and perceptively probably satisfies every definition of religious whether a writer intends it to be religious or not." Robinson is deeply influenced by the writings of John Calvin, and Rev. Ames and Rev. Boughton duke out their ethics vigorously and intelligently.

Still, some of Home's simplest moments seem its holiest. After Jack finally, inevitably, gets drunk again, Glory washes and shaves him and puts him to bed. As he sleeps off his hangover and their father retreats to bed, she stands in the kitchen. "She had nothing better to offer them than chicken and dumplings," Robinson writes. "...So she bathed the hen and set it in water with the carrots and an onion and the bay leaves. Some salt, of course. And she turned on the heat. Poor little animal. This life on earth is a strange business."

The poaching of a chicken, the washing of a drunken brother: sometimes these really are the sacraments of life.

Charlotte Bruce Harvey is the BAM's managing editor; Marilynne Robinson answers questions about her time at Brown at Brownalumnimagazine.com.