Back on the Rez

When David LaSarte-Meeks was growing up on the Coeur d'Alene Indian reservation in northwestern Idaho, unemployment there was 80 percent. His parents had no choice, he says, but to move in search of work elsewhere. When LaSarte-Meeks was in sixth grade, his family headed to southern Alaska, where his father found work in the oil industry. "It was pretty far removed from my reservation," LaSarte-Meeks says. "But at the back of my mind, I always thought it would be nice to go back there." 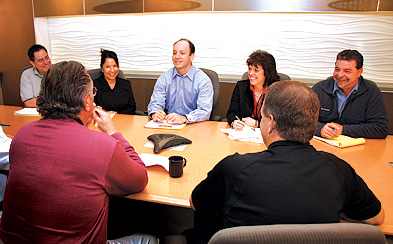 Courtesy David LaSarte-Meeks
Just over two years ago LaSarte-Meeks returned to the reservation as the CEO of the Coeur d'Alene Casino Resort and Hotel. The facility, which includes one of the country's top-ranked golf courses, the Circling Raven Golf Club, began as a bingo hall in 1993 and now has 1,000 employees and brings in around $30 million annually.

"Basically, anyone who wants a job can have one," LaSarte-Meeks says. "There's no doubt the resort has benefitted the community."

LaSarte-Meeks was the first member of his family to attend a four-year college. He says he learned about Brown from a high school counselor: "I said, 'Okay, I'll apply.' I didn't know what the Ivy League was. We didn't know anything about it."

At Brown he concentrated in civil engineering, then earned law and business degrees at Stanford. All along, he wanted to apply his skills to Native American needs. He served as executive director of the Arizona Indian Gaming Association, and before taking the job at Coeur d'Alene, he worked at a Seattle law firm focusing on Indian treaties and gaming statutes.

He says that when the Coeur d'Alene's tribal leaders approached him about running the resort, he felt compelled to accept the offer. "It's my own tribe, my own relatives, my own people," he says. "The success I can generate at the casino and the resort translates directly into better opportunities for the community."

He describes the job as an "odd hybrid" between business executive and nonprofit leader. He oversees the golf course operations, the 100,000-square-foot casino, and the 202-room luxury hotel. After expenses, all the profits the resort earns go toward education, economic development, and other tribal programs.

The Coeur d'Alene tribe numbers about 2,000; half the members live on the reservation. They call themselves Schitsu'umsh, meaning "the discovered people, or those who are found here." Their common name was given to them by French traders in the early 1800s. Coeur d'Alene means "heart of an awl," and was the traders' way of referring to the tribe's sharp business skills and aggressive territoriality.

When LaSarte-Meeks arrived at the resort, it was, he says, after a period of turmoil. According to the Spokesman Review, the local newspaper, the previous CEO had been fired and then sued by the tribe for breach of fiduciary duties. The controversy created a rift among casino employees between the ex-CEO's supporters and opponents.

LaSarte-Meeks says he preferred to look forward, not backward, once he arrived. In his first year, he set about streamlining the resort management and bureaucracy, and sometimes setting up better business practices.

"It's a very normal thing to happen in a business that grew so quickly," he says. "There's just lots of things that weren't in place." The human resources department had barely grown since the casino had opened, though the casino had grown from 50 to 1,000 employees. "There had been growing pains," he says, "and lots of things had been overlooked."

Despite never having run a business before, LaSarte-Meeks grew profits by 20 percent during his first year. At the same time, he raised the minimum wage at the resort from $6 an hour to $8.50; he also cut in half the amount workers were paying for health insurance.

Over the next few years, LaSarte-Meeks plans a major expansion of the resort. He wants to open several new restaurants, add a high-end wing to the hotel, and build a spa, an entertainment center, and a convention hall. Coeur d'Alene, he predicts, will soon become a "major resort destination."

Reader Responses to Back on the Rez