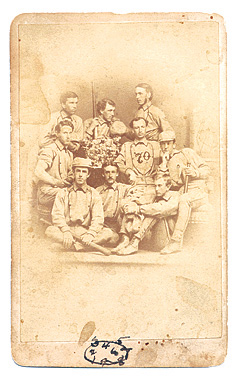 Established on campus in 1863, baseball was the second intercollegiate sport played at Brown (rowing was the first). This photo, taken five years later, depicts the starting nine—all from the class of 1870— from the champion team of 1868. Their greatest game was most likely their June 17, 1868, win, by a score of 22–19, over the Boston "Lowells," which was considered New England's finest team at the time.
What do you think?
See what other readers are saying about this article and add your voice.

Reader Responses to Batter Up!