The first time I met Thomas Reinhart—a short eight months before he died of cancer—I had a preposterous question to ask him. 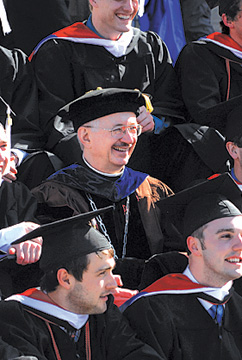 When he arrived on the Brown campus as a young monk and doctoral student from the Midwest, he was delighted to discover that his Providence lodgings were above a pub called Ronnie's Rascal House. Eric Hollas, a fellow Benedictine who came east with Dietrich to study at Yale and who later joined him back at Saint John's, says that, from his first moments on campus, Dietrich's time at Brown was unconventional. "There was this quirky sense of humor and an insatiable curiosity," he says, "and I think Brown fed that."

After earning his doctorate in 1984, Dietrich joined the history department at Saint John's as a full professor. From 1988 through 1991, he was dean of the College of Arts and Sciences; he was elected president in 1991. In that office, he racked up many quantitative successes: he raised a lot of money; he improved the size and quality of the applicant pool; he built many buildings. But perhaps his most striking and long-lasting accomplishment was his commissioning of the widely acclaimed and exhibited Saint John's Bible, which was handwritten and illustrated using medieval techniques, the first such work since Gutenberg's invention of the printing press. "This is where his sense of history came into play," Hollas says. "He realized he could actually contribute something to the cultural history of the United States." Saint John's is a small university, but Dietrich made it a big place.

Which is, in part, why I felt daunted asking him to speak at my wedding when we met last spring while I was in Collegeville to give a lecture on foreign policy. It was bad enough that he was a busy man. It was even worse that my fiancée and I, averse to religious rites, were not being married in the Catholic Church. But we thought a marriage ceremony demanded some spiritual heft, and perhaps a little divine assistance. And in Dietrich—about whom I had heard much from my father, a Saint John's alum—I thought I might find a man whose mind and soul could guide us.

Dietrich's devotion to the Benedictine order and to God were palpable. (When he told me of presenting a facsimile of the Saint John's Bible to Pope Benedict, his eyes widened and his voice hushed: "Benedict said, 'This is a work of art. This is a great work of art. This is a work for eternity.'") Yet he was generous, perceptive, and ecumenical enough to seize the thin thread of spirituality that my fiancée and I held out to him, and at our wedding he wove it into a talk about love that wowed an audience of worldly journalists. He spoke of Judaism and Catholicism and for good measure threw in a poem by the Sufi mystic Hafiz. ("A religious hat trick!" a friend of mine exclaimed after the service.)

When I earnestly thanked Dietrich afterward, his eyes welled up a bit. I thought he was perhaps the most gentle man I had ever met, yet clearly there was strength and drive beneath the warm eyes and the salt-and-pepper mustache. And when I learned that he had died on December 29, after a brief, fierce battle with melanoma, I slumped against a wall, a little surprised by my own grief. After all, we had known each other only briefly.

Dietrich might have explained it this way, as he did in a tale he recounted at the wedding: "A couple of weeks ago the father of a friend of mine died after a long struggle with cancer. I spread the news around the monastery and found myself tearing up every time that a monk thanked me for the news. I realized that every death touches every other one, taps into stories that unite us all." That may be. But Dietrich's death touched me not because it tapped into other stories, but because it marked the end of his. Fortunately, it was one that people will be telling for a long time.

Peter Scoblic is executive editor of The New Republic.

Reader Responses to Blessed with Clarity