Could computers eventually replace shovels in archaeological research? At least one Brown researcher thinks they might. 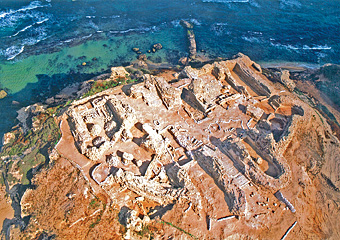 To prove it she's taking on the Crusader Castle , one of the world's most endangered archaeological sites. For decades, archaeologists have puzzled over what the Castle, which overlooks the Mediterranean Sea from high atop a cliff along the central coast of Israel, might have looked like. Built in the mid-1200s by the Crusaders after their conquest of the Holy Land, it was sacked a few decades later by Egyptian Mamluks, who had their captives demolish the structure. The 6,500-square-foot stone fortress lay in ruins.

In 1950 Israeli archaeologists began excavating the castle and the surrounding medieval city. After thirty years of work, they had produced a model that was still 70 percent conjecture.

Now archaeologist Katharina Galor '96 PhD thinks that in a mere four years she can put together a model of the entire site that is only 20 percent conjecture. "We really hope that this is going to forever change the field of archaeology," she says.

Galor's ace in the hole is technology. For the past 100 years archaeological fieldwork has meant digging and sifting through dirt, looking for remains, and then meticulously recording where the item was found and what it looks like. Galor says working through a typical twelve-foot-by-twelve-foot area can generate up to fifty sheets of paper and fifty photos, all of which need to be catalogued, analyzed, and passed on to an architect or surveyor, who then tries to assemble a model of the area.

But working with engineers and computer scientists, Galor has devised a way for computers to handle most of these chores. Starting this summer, Brown engineers David Cooper, Benjamin Kimia, and Gabriel Taubin '91 PhD will join her and researchers from Israel and the University of North Carolina to position several digital video cameras around the site where they are digging. Every time someone from the team finds anything, from a pottery shard to a piece of wall, the scientist will direct a signal to the camera. Computers will later analyze the film, marking the moment when the signal was received and where the investigator was standing—essentially doing all the work archaeologists used to have to do by hand.

Stage 2 involves using a scanner to create digital images of all the objects found. The scanner in this case is a tripod-mounted, video-camera-shaped device that can direct a laser in any direction to document the remnants of the Castle from every angle. 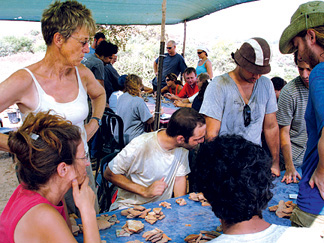 Galor, in red, working in Israel.

Once these images are stored in memory, the computer can precisely measure every object's contours and begin figuring out how they might all fit together. Experts will still be needed to guide the computer in the right direction and review its progress, but much of the grunt work will be gone. So will a lot of fruitless speculation, as the computer's mastery of the data should allow it to identify theoretical dead ends. If a gap remains and the piece that fills it is later found, the computer will be ready to update its model.

None of this research, which is funded by a four-year $2.6 million National Science Foundation grant, has required the development of new technology. Rather it involves taking technology that Brown engineers have earlier developed and applying it to archaeology.

"There will be a lot of experimentation and adjusting," Galor says, "which we hope will result in some kind of user-friendly technology that archaeologists will want to use in the future. For archaeology, this is a dream come true."