Doing It the Hard (Right) Way

Jeff Prystowsky '06 started his music career riffling through Providence dumpsters for cereal boxes. He and Ben Knox Miller '06 would cut and fold the cardboard into CD covers and then silkscreen them. The art fit the rustic, handmade ethos of their band, the Low Anthem . "People would write us e-mails—'I ordered your record today, and I got Apple Jax! That's my favorite cereal! How'd you know?'" Miller recalls with a laugh. "We did everything the hardest possible way, but it was an aesthetic choice." 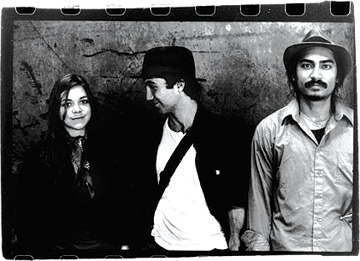 Willa Mamet
The Low Anthem: Jocie Adams '08, Ben Knox Miller '06, and Jeff Prystowsky '06.
Those choices are paying off. Without shedding its homespun aesthetic, the Providence-based band is building a sizeable audience; it won the Boston Music Award for Best New Act in December, and NPR broadcast Low Anthem's "To Ohio" as its Song of the Day in early January. In February, Rolling Stone featured the band in their "Breaking Artist" column , which introduces musicians on the rise.

Band members Miller, Prystowsky, and Jocie Adams '08 met in Brown's music department, where they studied composition under Professor of Music Gerald "Shep" Shapiro. Before Adams joined the band, Miller and Prystowsky put out Low Anthem's first full-length CD, the 2007 What the Crow Brings . It revived themes as old as American roots music itself and gave them a modern story: "Sawdust Saloon" is about a soldier leaving not for the Civil War, but for Vietnam. The eleven intimate tracks sound as if they might have been recorded on the creaking porch of that sawdust saloon, or at the senior prom in a dying coal town. Miller practically whispers the lyrics, making even rock songs sound like lullabies. You can hear Prystowsky's fingertips walk the neck of his upright bass. The CD was voted Best Album in the Providence Phoenix's 2008 Music Poll, which gave it a leg up in the Boston polls.

Adams joined Low Anthem in late 2007, and in September 2008 the trio released Oh My God, Charlie Darwin , which has the same authenticity and heart as Crow, but a wider musical range. Gospel influences are apparent, and an occasional Tom Waits–like growl complements plaintive folk tunes. Miller sees Charlie Darwin as a more interrelated collection than What the Crow Brings. "We think of it like a book. All the songs are leaning on each other," he says. Vin Scelsa of the influential New York City folk radio station WFUV listed Charlie Darwin as one of his dozen favorite albums of 2008 (alongside works by Bob Dylan and Brian Wilson).

Miller, Prystowsky, and Adams play guitar, bass, and clarinet, respectively, but on Charlie Darwin each plays at least half a dozen instruments, including such obscure, old-timey ones as the pump organ and the rack harp. Miller usually brings to the band a musical idea, or a sketch of some lyrics."Always the songs come as just this little skeleton," he says, "and then they become what they are when these guys get involved."

So far, the band members have continued to do almost everything themselves, from booking shows to recording, producing, and promoting their albums. They recently hired a manager, Kate Landau '08, but Prystowsky still goes to the post office each morning to mail out the CDs people have ordered from the band's website. The covers are still hand-silk-screened—each copy of Charlie Darwin is part of a numbered series—only now they're done by an independent printing outfit, and, no, they're no longer made from cereal boxes.

The success of Charlie Darwin has drawn the interest of record companies, and the band's next album, which they're working on now, may be the first one that they don't release themselves. "It would have to be a record company that basically acknowledges the success that we've been able to achieve on our own," says Miller. "What are they going to say? 'We'll get you such and such.' Well, we already got that. It's a good position to be in."

Beth Schwartzapfel is a BAM contributing editor. Listen to the Low Anthem at lowanthem.com.

Reader Responses to Doing It the Hard (Right) Way