December marked the end of the two-year-long basic science phase of the Mars Reconnaissance Orbiter (MRO), NASA's $700 million effort to find evidence of water on the planet and to identify locations where life could have once flourished. Since it landed on the Red Planet in late 2006, the MRO has examined millions of square miles, taking photographs, analyzing the mineral content of the surface, and tracking the weather. Geologists Jim Head '69 PhD and John Mustard '86 ScM, '90 PhD have been deeply involved in the mission. Mustard is part of an international team helping NASA sift through the mission's findings and plot out the Mars project's future. 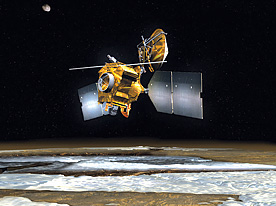 Nasa
BAM interviewed both researchers to find out about how the mission is going so far and where it is headed.

BAM What has been the most significant finding of the MRO so far?

Jim Head The characterizations of different time periods according to their mineralogy. There are three basic phases. The early period is heavily modified by water and clays; the middle period has a lot of sulfur in it; and the later period is just cold desert weathering.

BAM Why does that matter?

Head What we're ultimately trying to understand is the history of the planet. A key part of that is what role water has played. We can see in early Mars history that there's a lot of water. It looks like it's all over the surface, but then the climate changed. Of course, water is linked to the possibility of life on Mars.

John Mustard What the Mars program has done brilliantly is to help understand the history of water on the planet and to identify where habitats may have existed. We know water was widespread, but where did it stick around long enough and in the right setting to actually transform the minerals from their original volcanic form to more of an altered state?

BAM What's next for the mission?

Mustard We've now come up with something on the order of ten different unique environments that would have existed on the planet. What you now need to do is go and understand which of these have the greatest potential to sustain life and which would have had the greatest potential to preserve any evidence of that. The first step is the Mars Science Laboratory, which is set to launch in 2011. We've been very active here at Brown in proposing potential sites to send this rover. One of the sites the lab will go to is an old lake deposit. There are several other interesting sites like that, which we know on Earth have good potential to preserve organic compounds or carbon-bearing molecules. It would be very important to explore these different environments.

BAM Did life once exist on Mars?

Head It's horribly terracentric to think that life only exists on Earth. It wouldn't surprise me at all to find life on Mars or elsewhere in the cosmos.

Mustard Compared to five years ago, I am much more enthusiastic about the option.

Reader Responses to Life On Mars