There's nothing like a road trip, especially, says Tony Booth, when you're looking out the window of an RV. 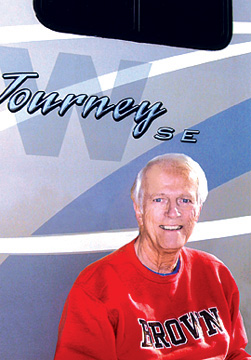 Booth leads caravan tours throughout the United States for Winnebago. During the day travelers journey independently in their RVs, then rendezvous at an overnight site. Booth, who lives in Hot Springs Village, Ark., has led trips to Mexico, through the American West along the Lewis and Clark Trail, and across Canada to Alaska. The tours usually involve 15 to 20 vehicles and last anywhere from a month to 45 days. Booth's most recent expedition started in Minnesota at the headwaters of the Mississippi River and ended in New Orleans.

"If you fly from place to place you're going to see the things you want to see," Booth says, "but for me, getting there is half the fun. There's so much to see along the way."

Booth began RV-ing with his wife and three kids way back in 1968, in a small but cozy unit they used to visit relatives in New England or Louisiana. "It gave us the freedom to stop if we saw something along the road," he says. A bit of a history buff, Booth says he likes to walk around small towns, learning about their early settlers and subsequent development.

When he retired in 1995, Booth upgraded to a Winnebago travel trailer that he hitched to a pick-up truck. He now owns a 26-foot-long diesel-powered Winnebago Journey outfitted with, among other things, a satellite dish, a refrigerator with icemaker, and a washer and dryer. Over the course of a year, he says, he and his wife spend around six months on the road, either leading a tour or traveling on their own.

"You stop in a small town," he explains, "and walk around and have a cup of coffee, and it's not a McDonald's, and they tell you where the local people go to eat dinner." He offers this tip: "Walk in with a smile on your face; people will start talking to you."

The reward for his RV travels, Booth says, is just that—meeting new people. At night, all the RVs from his caravan park at a campsite or trailer park and gather around a campfire to discuss what they've seen and done on the road that day. "I've got a Christmas card list of more than 100 couples we've met along the road," he says.

According to Booth, there's nothing like an RV-camp happy hour. "You pull in late in the afternoon, and I can get my motor home parked and hooked up to electricity within 15 minutes," he says. "Then I mix the martinis, put the chairs out, and sit down and relax. Within 15 minutes, anytime, we're talking to somebody."