Planning for the Long Haul

On the morning of February 21, as members of the Brown Corporation met to discuss the FY10 budget, the New York Times reported that even Harvard, the world's richest university, was having trouble paying its bills. In the first four months of FY09 the marketable portion of Harvard's endowment had lost 22 percent of its value, a number that's expected to reach 30 percent by year's end. Any illusions that even a multibillion-dollar endowment might provide a safety net in the global financial freefall were shattered. 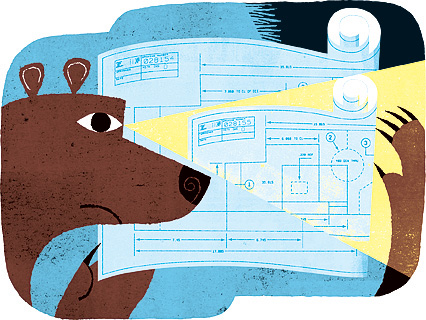 When the Corporation met in February, Brown's money managers assumed that Brown's endowment will drop almost 29 percent, from $2.8 billion to $2 billion, by June 30, the end of this fiscal year. According to the National Association of College and University Business Officers, college endowments overall lost an average of 23 percent of their value over the first five months of the year. They're not out of the woods yet. Although universities use no standard method for estimating endowment value—making school-by-school comparisons tricky—Brown's losses should be near the industry average.

Donations to the University have also dropped during the current recession. The Brown Annual Fund, a major source of unrestricted income, has grown rapidly during the Campaign for Academic Enrichment, and next year's planned budget growth was expected to benefit from this continued largesse. But with individual donors' investment portfolios declining rapidly, fund-raisers expect annual giving to fall $4 million short of the fund's goal this year.

The global financial crisis hits Brown midway through one of the biggest growth spurts in its 245-year history. The five-year Campaign for Academic Enrichment, which has raised more than $1.3 billion of its $1.4 billion goal, has already funded many of President Simmons's major strategic objectives: need-blind admission, nearly 100 new faculty positions, and about a dozen major on-campus construction projects.

Some of these projects have already been paid for. The $95 million Sidney E. Frank '42 Hall, for instance, houses life-sciences laboratories, classrooms, and offices. Pembroke Hall has been fully renovated and is home to the new Cogut Center for the Humanities and the Pembroke Center for Teaching and Research on Women. The old biology labs in J. Walter Wilson Hall have been replaced by those in Sidney Frank Hall, and J. Walter Wilson reopened last fall as the site for the new post office, as well as seminar rooms and student-life offices. On the College Green, Rhode Island Hall is being rehabbed to receive the new Joukowsky Institute for Archaeology and the Ancient World.

At its winter meeting, the Corporation gave its blessing to fully funded projects while recommending that the University shift its physical-expansion strategy from erecting new buildings to renovating existing structures. Construction will begin this summer on two projects already funded: a creative arts building along the Pembroke walkway and the Stephen Robert '62 Campus Center in Faunce House. A $14.75 million gift from the estate of Raymond Moran '41 will also enable Brown to build a new aquatics center.

Building projects that aren't fully funded will be scaled back or postponed to avoid incurring more debt, says Executive Vice President for Planning Dick Spies. The academic departments that were slated to move into the so-called Mind Brain Behavior building, which was also planned for the Pembroke walkway, will instead be located within upgraded existing campus facilities. The medical school, which has been searching for a site for a new medical education building, will now look for an existing building to rehab. A planned fitness center will likely be downscaled.

Because Brown plays such an important role in the hard-hit economies of Providence and Rhode Island, administrators are trying to minimize the impact of Brown's cutbacks on the city and state. Although roughly thirty staff members will likely lose their jobs this year, the University's budget will in fact grow almost a full percentage point in FY10, due to faculty searches, building rehabs, and an expected 10.9 percent increase in financial aid.

Simmons publicly stresses that Brown's focus during the recession will be on its "core" values: academic excellence and financial aid. Echoing that priority, the Corporation reaffirmed its commitment to need-blind admission and vowed to continue to require no financial contribution from parents who earn less than $60,000 a year and to provide loans for students whose families earn less than $100,000. Although tuition and fees will go up next year, the Corporation approved a 2.9 percent increase, to $49,128, the smallest price hike since the 1960s and, with Princeton, the smallest in the Ivy League.

Plans to expand the Graduate School are on hold, and most nonacademic budgets will be cut. Slower overall budget growth is anticipated for several years, resulting in more cuts on the administrative side. By 2014, administrators plan to scale back planned growth by $80 to $90 million.

A hiring "pause" implemented last fall remains in place, and in January Simmons announced that there will be no salary increases this year and that she was asking for a salary cut herself. Faculty growth will slow, but layoffs will be confined to administrative employees. Many state schools have laid off both faculty and staff in recent months. Among the Ivies, Harvard has offered early retirement to 1,600 staffers, while Dartmouth eliminated sixty jobs and cut the number of hours for another twenty-eight staff members last fall.

At Brown, Provost David Kertzer '69 says, "We're going to face a significant diminution in services for faculty and students."

Like Simmons, Kertzer believes that despite the current economic climate the University must above all hold onto the gains it has recently made and preserve as much momentum as possible. "We're in a much stronger position than we were several years ago," he says. "[Simmons's] leadership has put us in the top tier. We'd long been viewed as a top undergraduate college, but not among research universities. This investment has put us in the top rank. We have worked to build up faculty salaries. We've added 100 faculty. We've added competitive packages for graduate students and need-blind financial aid for undergraduates. If we slip back, there's a risk of losing ground."

Reader Responses to Planning for the Long Haul