I first met willoughby sharp was in the spring of 1959. I was standing in front of University Hall dressed in a smock and beret. I had an easel, a canvas, a very fine brush, and a pallet with a large blob of black paint. I was applying very fine black strokes when Willoughby walked by. Thence ensued a tête-à-tête tinged with philosophy. It lasted 45 minutes. We dropped such names as Berenson, Panofsky, and Greenberg. I remember that one of my points was that all artists selected from the same basic forms and colors, and it is only the brush stroke that differentiates the great artist from the ordinary. 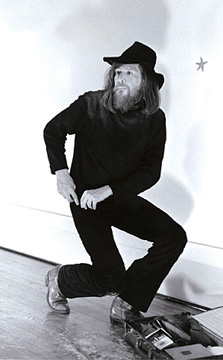 Ann Banks/BAM
Willoughby Sharp during a 1969 visit to campus to lecture on kinetic art.

Willoughby, who died of cancer on December 17 at the age of 72, enjoyed that kind of talk. He became a friend and a major figure in the U.S. avant-garde world. He was many things, among them a performer, writer, producer, curator, and publisher. As Margalit Fox wrote in the New York Times after his death, Willoughby "helped expand the very idea of what constituted a work of art."

From 1970 to 1976, Willoughby published Avalanche, a beautiful art magazine that included probing interviews with emerging contemporary artists. His 1969 work, Earth Art, an exhibition at Cornell that included works by Dennis Oppenheim, Robert Smithson, and Hans Haacke, among others. Willoughby also helped introduced Joseph Bueys to America. These things made him central to the art world of the 1970s and beyond.

Willoughby's work is found in art museums around the world, including the Museum of Modern Art in New York City and the Museum of Fine Arts in Boston. In 1976, he represented the United States at the Venice Biennale. His video performances, often done when he was on LSD, grew out of his personal life. Saskia!, which he first performed in 1974, grew out of Willoughby's sadness at losing touch with his daughter, whom he could not see after the breakup of his first marriage. (He was married three times.) For his 1975 work, Full Womb, he took LSD then climbed into an industrial clothes dryer while ranting about his parents making love. 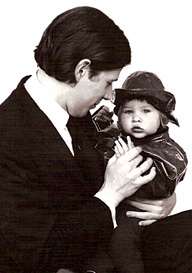 Willoughby also opened and closed several galleries, including the Willoughby Sharp Gallery in Manhattan's SoHo neighborhood, and organized group shows and countless events. Willoughby acted as the master of ceremonies of every party or art event he attended, shouting out the names of celebrities and friends as they arrived. Always flamboyant, he was known for his hats, often a bowler in the 1960s and 1970s and an assortment of styles thereafter. A student of history, after Brown he studied at the Univ. of Paris, the Univ. of Lausanne, and Columbia. He was always a fount of art information.

He and I worked on several different projects together. In 1987 we produced the video Who Killed Heinrich Hertz? to celebrate the 100th anniversary of the German physicist's discovery of the nature of electromagnetic waves. Willoughby wrote the script and played Hertz; I directed.

Willoughby is survived by his third wife, Pamela; his daughter, Saskia; and two grandchildren. He was a doer, and remains a legend in the contemporary art scene. He once said that he devoted his entire life to art. He is deeply missed.

Ira Schneider is a video artist living in Berlin, Germany.