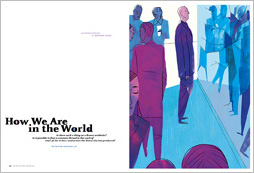 David Shields's view of the creative work of former Brown students was interesting and perceptive ("How We Are in the World," January/February). It certainly reminded me of why I left a place that I liked a lot to come to Brown in 1970.

I came for the Brown undergraduates, and I was not disappointed. There are probably quite a few who might have been mentioned in that article but were not. Two come immediately to my mind: Geoffrey Green '73, who worked with Jack Hawkes as well as me, and recently published a metafictional book based in the world of opera, called Voices in a Mask; and Robert Arellano '91, '94 MFA, who worked mainly with Bob Coover and has produced interesting experimental fiction in both print and digital media. They fit the pattern very well and support Shields's case.

David Shields's article on a Brown aesthetic looks to the famous and high-profile among us. Shields defines the Brown experience as one lived relative to other Ivy League schools by those who were not good enough to get into Harvard or Yale. Perhaps this was the case in the 1970s; it is not the case now.

If nothing else, at Brown I learned to express my perception of the world in "I" statements. As an undergraduate I felt intimidated by the greatness of my peers, who could have attended any university—yes, even Harvard or Yale—but who chose Brown. As an alumna, I am acutely aware of the badge of honor a Brown degree represents in a wide-open world.

I was accepted into a PhD program in geology at the University of Minnesota despite deficiencies in math, chemistry, and physics. The director of graduate studies later told me how much they appreciated students from places "like Brown," where we may learn things, but where, above all, we learn to think. If there is a common thread uniting Brown graduates, it is their ability to bring an experience of art and creative expression into their daily lives and occupations. Whether we are artists, writers, scientists, parents, office workers, or anything else, I believe the Brown aesthetic is found in the act of thinking openly, widely, and creatively.

"How We Are in the World," which included a small quote from me-, succeeds in shaping so many disparate yet distinctively Brunonian voices into a compelling whole.

Shields wonderfully framed the essay with his own pilgrim's progress. As a fellow writer I especially loved his account of his shower-scene epiphany. I get my best ideas in the shower, too.

I was particularly proud to have my own quote included with those from Coover and other Brown literary giants. I have heard from two fellow alums in the Boston area who also found the essay thought-provoking. Thanks to the BAM and to David Shields for provoking a lively literary conversation in many shades of Brown.

I found the article by David Shields extremely stimulating and enlightening. As the author of more than a dozen unpublished novellas, I have always credited the University for sparking my interest in writing fiction. During my (often tumultuous) time at Brown, I took one creative writing course, taught by John Martone, and it set off a lifetime pursuit that has given me endless hours of relaxation and enjoyment.

It is amazing that the "voice" Shields describes in the writings of Brown graduates perfectly reflects that of my own fiction. I'd love to see a follow-up to this article from the standpoint of our graduates' collective musical aesthetic. My one recording course, taught by Gerald Shapiro, gave me the impetus and background to record my entire output of music on Apple's GarageBand software. Thanks so much for an interesting read.

In his article exploring whether there is a Brown aesthetic, David Shields concludes, "we semiotics concentrators" knew "on day one" that "[t]he writer getting in the way of the story is the story, is the best story, is the only story."

I disagree. The bizarre love triangle consisting of reader, writer, and text begins to deteriorate when one party—the writer, for instance—predominates. I hope the Brown aesthetic teaches precisely that there is no "only story," and that it inspires us to go far beyond what we knew "on day one."

In his essay, David Shields omits the transcendent works of Marilynne Robinson '66, which suggest that the Brown aesthetic is broader than Shields describes. On the other hand, if literary self-consciousness and formal inventiveness are the hallmarks of a Brown writer, the work of Jincy Willett '78, '81 AM rates a mention as well. Her novel Winner of the National Book Award gently skewers the kind of sensibility Shields seems anxious about. Moreover, in our graduate writing workshop she managed to make Jack Hawkes laugh, which was no small trick.

I really enjoyed Shields's article. I have always found a tribal similarity in all Brown grads: they tend to be do-gooders and are forever recent grads. Some of my most creative classmates are physicians, and some of the most scientific are artists. The Research-to-Performance Method of Rites and Reason Theatre is a great example of our aesthetics, where preparedness backs up confidence.

I have long wondered whether the 1974 freshman convocation speaker single-handedly molded my class. On a muggy September afternoon we gathered in Meehan Auditorium to listen to Dick Gregory. I had met many political activists, but he was the first artist-activist. He spoke to us of injustice and activism, and his speech changed my life as an artist and activist.

In the same issue of the BAM, I was struck by the item on comics ("Funny Papers," Finally). In 1989 I was amazed when Jack Kirby showed me Kirby's paintings and told me his Captain America character came from the stories of the Golem told by his Yiddishe Bubbe in his impoverished childhood. Jack Kirby, born Jacob Kurtzberg, spoke to the outsiders, and gave them hope. He reached disenfranchised youth as no other. Save one life, you save the world.

David Shields's laudable attempt at discerning a Brown aesthetic is, regrettably, ultimately an exercise of breathtaking inanity. His quest merely glosses over Brown's decades-old success in producing many notable writers of exceptional talent. Where does he propose to place within his literary pantheon the likes of such noted science writers as Kenneth R. Miller '70 or Andrew Chaikin '78 or David Grinspoon '82? Or such noteworthy best-selling writers of nonfiction as Susan J. Gilman '86, David Lipsky '87, or Alec Klein '90? Where exactly does he put Naomi Novik '95, author of the popular historical fantasy Temeraire series, in his Brunonian literary landscape?

Editor Norman Boucher replies: Shields's essay was one writer's perspective on the Brown artistic landscape. As such, it was never intended to be comprehensive. Indeed, the fun of essays like this one is that they prompt readers to add their own favorites to the list. As for Marilynne Robinson, although she was not in the Shields essay, she was the subject of our lead Arts & Culture story on page 40 of the same issue.

Reader Responses to A Brown Aesthetic?