Radiation therapy is about being still. Apparently I'm quite good at it. "It's amazing how you line up perfectly every time," says Paul, my radiation therapist. "I'm talented that way," I say. Paul is an ideal radiation therapist: pleasant but not fakely enthusiastic or overly chatty at 7:15 a.m. He tells me what's about to happen: "This is the treatment from the back," etc. 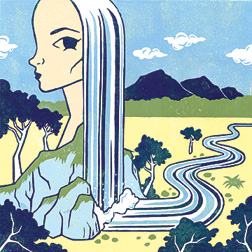 Every morning I see the same woman in the dressing room. She never quite closes the door to the stall. Her hair is at that awkward post-chemotherapy stage, not quite the concentration-camp look, but too short to do anything with. I hate her.

Two months later, though, I'm the one with the impossible post-chemo-therapy hair and wishing I were a man or an African American woman who could carry off the Mia Farrow look without eliciting pitiful half-smiles from strangers. My extremely supportive husband tells me that it looks good, that I should ditch the super-straight and long wigs I had been wearing for the past several months. But I'm not ready to field the queries from my own patients, who have just gotten used to the wigs, and have finally stopped saying, "Your hair looks GREAT! What did you do to it?" A patient I've always been close to persisted: "I NEED to know what you did to your hair! Is it something illegal?"

All my life I have struggled with my thick, unruly, curly hair. Before my cancer diagnosis, I had taken to wearing it in a ponytail except for the rare special event when I would get it "blown out" straight and be subjected to everyone and her mother telling me how FABULOUS it looked in that labor-intensive unnatural state. At least now I had effort-free unnatural hair and people telling me how great it looked ten times a day. I was okay with this until my eyebrows and eyelashes fell out, at which point I stopped getting hair compliments and felt like an alien.

If I had been thinking about the fact that I was wearing a wig, instead of worrying about the fever I'd just spiked, I probably would have been spared the embarrassment of what happened that fall night.

I was headed to the hospital for a blood-count check. As I approached the entrance, I heard the whir of a helicopter landing on the low roof. I looked up, and in the next second the wind carried my wig off my head. Mortified, I looked to see who was watching (thankfully no one), retrieved my wig from a bush, and burst out with the most cathartic belly laugh I'd experienced since the beginning of my cancer ordeal—and possibly ever.

Four years later, the radiation, the blood counts, and the wigs feel like a movie I must have seen but began to forget as soon as I walked out of the theater. I have taken to blow-drying my hair twice a week to achieve the straight look that in the past I could only get from a salon (or a wig). I am somehow finally at peace with it (although less so in the summer, when the humidity laughs at my half-hour of pulling and brush angling, and frizzes me out in mere seconds.)

The next chapter in my hair bio will be written when I cut it off and donate it to charity in the coming months. At least that's what I'm planning to do. As my long hair now reminds me daily of my continued good health, it may be difficult to part with.

Hilary Light Deutsch is a pediatrician in Bethesda, Maryland, and still healthy.