If only it were so easy. At the final event of a yearlong celebration of Charles Darwin's 200th birthday and the 150th anniversary of the publication of The Origin of Species, moderator Ken Miller '70 read to the audience a headline from the July 26, 2007, New York Post: "Evolution & God Do Mix: Pope." Pope Benedict XVI may have reconciled his faith with evolutionary theory, but it's clear many Americans have not. 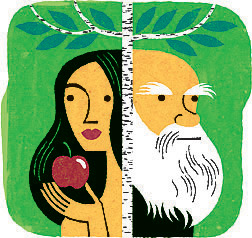 Thanks to the Cogut Center for the Humanities and the Committee on Science and Technology, the discussion brought together four thinkers from a range of fields to air out the supposed conflict between evolution and religion.

Pepperdine University's Edward Larson, author of Summer for the Gods: The Scopes Trial and America's Continuing Debate Over Science and Religion, opened with a history of scientific and religious objection to evolutionary theory.

The contemporary idea of creationism came out of an earlier sense that complex human organs like the human eye, and organisms such as butterflies and flowers "were simply too irreducibly complex," to have evolved, Larson said.

Creationism has since found broad support across the United States; you can see life-size replicas of the earth's history as interpreted through creationism at Cincinnati's $27 million Creation Museum.

Massimo Pigliucci, professor of ecology and evolution at SUNY Stony Brook and the coauthor of Making Sense of Evolution, critiqued attempts to resolve the debate through science.

Of Frank Tipler, a physicist who claims physics can prove the existence of a Christian God, Pigliucci said, "This sounds ridiculous, because it is ridiculous." He also challenged Richard Dawkins' attempts to disprove God in The God Delusion.

Pigliucci pointed out that Darwin himself struggled to reconcile God and nature. To give God credit for the beauty of the butterfly, one must also account for the wasp, and the harshness and cruelty of the natural world, Pigliucci reminded the audience.

She highlighted a wood-engraved illustration of a single fig leaf, Ficus Carica, which accompanies the text of Eve's transgression, and pointed out that the scientific tone of the artwork is at odds with the emotion and shame of the text.

As moderator, Miller offered his own perspective as a practicing Roman Catholic and Brown biology professor. The author of widely used biology textbooks, he became the lead witness in the 2005 Dover, Pennsylvania, court battle over the teaching of creationism in the county's public schools.

In that case, the judge ruled that intelligent design is fundamentally not science, but that ruling does not reflect the general consensus across the country, Miller said.

He cited a study published in Science ranking countries in terms of public acceptance of evolutionary theory. Out of thirty-four nations, the United States came in thirty-third. (Only Turkey ranked lower.)

How did we come to this point? Many creationists see evolution as "anti-religious." To many of them, evolutionary theory implies that our lives are merely a "mistake" of nature, Miller said. Furthermore, creationists believe, evolution's determinism undercuts the concept of morality.

Humans are part of the inherent fabric of the natural world, though, Miller assured the audience. "We are not a mistake."

Reader Responses to Darwin vs. God