Latte with That Novel?

Remember the Brown Bookstore? Since moving to its Thayer Street location in 1970, the bookstore has remained as stable and constant as a small-town library even as the campus around it was transformed: blond bookcases, fiction along the wall to the right. 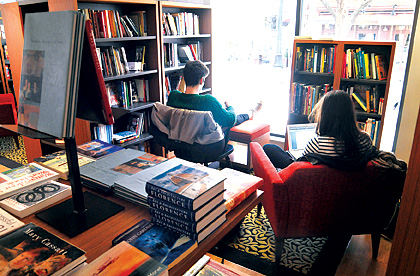 Photos by Frank Mullin
A light-flooded reading nook is part of the store's new floor plan.

Not any more. After a $3.5 million renovation, the Brown Bookstore has become the one thing it never quite managed to be: a place to hang out. The first thing you notice when you walk in is people: students sitting in chairs and at tables, cradling laptops and sipping hot drinks. The customer-service area, featuring state-of-the art computers and cash registers, has been moved from the back of the store to right out front in the middle of the action. Out back are a padded semicircular bench and a large floor cushion where little kids can sit with their parents and read or be read to.

In a nod to contemporary bookstores everywhere, there's the inevitable café, where students sit on modish clear white chairs sipping cappuccino, espresso, and gourmet teas, or chewing on sandwiches made by one of Providence's best restaurants and savoring desserts from an upscale patisserie. There's even a sitting area with a wide-screen TV.

The renovation began in 2007, after a lively campus debate over the bookstore's future. A University panel of professors, students, and administrators had recommended that Brown join other universities and outsource the 26,000-square-foot facility to a private vendor such as Barnes & Noble. At the time, the bookstore was barely breaking even. It kept its profits, but rented its space from the University for about $30,000 a year. By contrast, chain retailers were paying as much as $500,000. Keeping the bookstore independent didn't seem to make much financial sense.

But this is Brown, and so the idea of a chain bookstore taking over the friendly campus bookseller didn't go over well. Students, staff, and faculty formed the Save the Bookstore Coalition, arguing that an independent bookstore would be more responsive to the community's needs. Besides, the group reasoned, the chains would have to make their rent by charging higher prices. There were also worries that the store's staff, which is on the University's payroll, would be shifted to the private corporation's employ and lose Brown's more generous health and retirement benefits.

In the end, the Coalition's viewpoint prevailed. The chains said that they could maintain Brown benefits for employees only by negotiating a much lower rent than they would normally pay. This cut deeply into any additional revenues Brown might have captured. 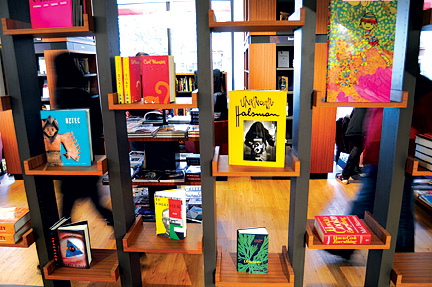 The new display cases at the Brown Bookstore entice customers to buy, buy, buy!
And so the rehab, the first since the early 1990s, began. Bookstore employees traveled to stores around the country in search of ideas. Textbooks went from the third floor to the basement to make room for a computer center and dorm-room furnishings.

On the advice of a New York marketing consultant and an architect, merchandise was shifted around to create better customer flow and new bookshelves were installed so that light from outside floods into the showroom. The color scheme is various shades of browns. "You want customers to walk in the store and think Brown University," says the store's associate director, Virangini Afzal '73.

The new layout seems to be working. Afzal, who has worked at the store for thirteen years, says that coffee mugs, a slow seller in the "total hodgepodge" of the old store, now have their own display shelf. The demand for them—and for shot glasses—is high: "We can't keep up with it," she says.

When choosing a vendor for the café, the University went local. Blue State Coffee (as in blue states and red states), which is located just up Thayer Street and co-owned and managed by Alex Payson '04, was selected to create the "College Hill Café operated by Blue State." Blue State keeps its profits but pays rent to Brown.

According to Elizabeth Huidekoper, Brown's executive vice president for finance and administration, the bookstore should net $300,000 a year on around $12 million in sales. In addition to generating revenue, Huidekoper says "the products being sold and services being offered are responsive to the Brown and local communities' diverse interests."

The decision to keep the bookstore independent is also beginning to look like a prescient decision. The chain booksellers, once thought invincible, are now facing economic trouble as people shop more readily online. Barnes & Noble eliminated 100 positions earlier this year because of falling revenue, and Borders saw its sales drop 9.4 percent in 2008.

"I don't think that the University at all doubts that this [remaining independent] was the right thing to do," says Elizabeth Gentry, Brown's assistant vice president of financial and administrative services. "This is ours—for the Brown community, our neighboring communities, and Providence. It's a pretty exciting option for us."

Reader Responses to Latte with That Novel?