The Ladies Make Him Laugh

Ryan Shiraki developed his latest comedy, Spring Breakdown, with his close friend and former Saturday Night Live colleague Rachel Dratch. Ironically, the movie's fate plays out like one of Dratch's popular Debbie Downer routines, in which she puts a damper on good news with gloomy pronouncements accompanied by the moan of a trombone. The good news is that Sundance audiences so loved Shiraki's female farce this last January that festival programmers had to add a second screening. The bad news, however, is that shortly after Shiraki finished the film Warner Brothers dissolved Warner Independent Pictures, the specialty division that produced it. As a result, Spring Breakdown will go straight to DVD in June—wah-wah. 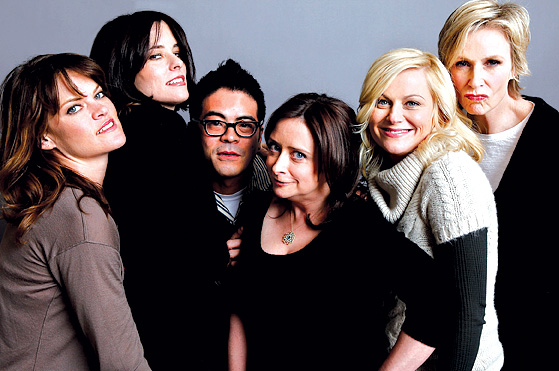 Jeff Vespa/WIREIMAGE
At Sundance last January, director Ryan Shiraki camped it up with funny ladies Missi Pyle, Parker Posey, Rachel Dratch, Amy Poehler, and Jane Lynch.
"This is the studio that made Watchmen," Shiraki said in a phone interview from his home in Los Angeles. "Our movie isn't in their orbit anymore. We're lucky we even got it made."

It's a shame this low-budget movie won't reach big-budget audiences, because it does something that few Hollywood comedies today can do: it lets women be funny. Over the last ten years, the rise of the so-called Frat Pack (Ben Stiller, Will Ferrell, Steve Carrell, et al.) combined with the popularity of Judd Apatow's gross-out, heart-of-gold comedies (40-Year-Old Virgin, Superbad) has relegated comedic actresses to bland supporting roles as the obligatory hot girlfriend or killjoy wife. "In a lot of these comedies, the guys get to do all the fun stuff, and the women are like, 'Honey, what are you doing?'" Dratch says. "In this film, we get to do the fun stuff."

Shiraki and Dratch wrote the screenplay, and she and her former SNL cast-mate Amy Poehler play thirtysomethings who tag along when their friend, played by indie actress Parker Posey, has to chaperone her boss's daughter on a spring break trip to Texas's South Padre Island. They're no Sex and the City hotties, and they're not finding their dreams or getting the guys. The movie's simply about three socially inhibited women who wrestle with their insecurities in a world of booze and bikinis.

"We wanted to flip the genre," Shiraki says. In Spring Breakdown women get to be the goofballs, and men are the sex objects. "The more political aspects of gender and comedy were always secondary to getting laughs, though," Shiraki says. "Ultimately, we just wanted to make a really funny movie."

Still, he acknowledges that his own experience as an outsider—he grew up gay and Mormon in Honolulu—explains part of his attraction to the marginalized world of women in comedy. Despite Hollywood's bias toward more bankable male stars, Shiraki continues to develop projects for largely female casts. For Katherine Heigl's production company he's writing a screenplay called Alpha Moms, about the cutthroat world of elite urban motherhood (think Tina Fey's Mean Girls for moms). For ABC he's developing Waffle House, a sitcom that draws inspiration from the 1970s diner comedy Alice. And this summer he'll shoot a pilot for an HBO show called Ladies, in which black female stand-ups play airport workers at LAX.

"It's tougher for women in comedy to get seen because studios are so bottom-line oriented," Shiraki says. "But it really baffles me, because the ladies make me laugh so much."

Reader Responses to The Ladies Make Him Laugh