The House of Worth

In 2001, Susan Wissler got an offer she could easily have refused. She was asked to be vice president of The Mount, the nonprofit organization in western Massachusetts that oversees the estate of famed American author Edith Wharton. 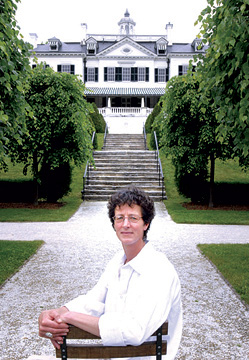 The Mount had serious financial problems. Built in 1902, Wharton's once-elegant home, sited on 113 acres, was literally crumbling from neglect. The organization spent more than it brought in each year, and was embroiled in a nearly 20-year-long dispute with its tenants, a theater troupe called Shakespeare & Company that used the abode to put on plays and as a dormitory for its actors. "I knew the organization was challenged financially," Wissler says, "but I probably did not have a full understanding of all the problems when I took the job."

An attorney by training, Wissler had practiced in New York City before deciding in the late 1990s to move to her vacation home in the Berkshires. She didn't know much about Wharton, who had chronicled the mores of America's upper classes in such classic novels as The House of Mirth and the Pulitzer Prize–winning The Age of Innocence. Wissler had read Ethan Frome, but "it didn't leave much of an impact," she says. "My introduction really came when I fell in love with the property."

Wharton was as talented a landscaper and decorator as she was a writer, and she designed The Mount with an emphasis on simplicity and modesty. (This is relative, of course. A three-and-a-half-story white stucco villa complete with cupola, balustrade, and, inside, a grand neoclassical staircase, Wharton's house can be considered modest only by comparison to its neighboring mansions.) Henry James was a frequent visitor, and would have strolled through The Mount's three acres of formal outdoor rooms, including an Italianate walled garden, voluptuous English flowerbeds, and an alpine rock garden.

When Wissler started at The Mount, her boss, former theater producer Stephanie Copeland, had already begun a major restoration of the house and grounds to their original condition. Using historical photographs, the gardens were given a $5 million makeover. Rotting windows were fixed, steel beams installed, and the entire terrace was disassembled and rebuilt stone by stone. Inside, scientists examined the paint and wallpapers to reproduce Wharton's color schemes. In 2005, President Bush gave the organization the Preserve America Presidential Award for its painstaking restoration. Visitors can now enter Wharton's personal suite and see the bed where she wrote every morning.

Wissler says her favorite spot on the estate is a wooded path shaded by a canopy of full-grown hemlock trees. "Underneath it is just this wonderful blue-green blanket of periwinkle that's overtaken everything," Wissler says. "It is a place of wonderful stillness and natural luxury and opulence."

Midway through the project, Copeland sparked a firestorm of criticism when she purchased Wharton's original library from a private collector. She felt it was critical to have the original volumes because of Wharton's profound devotion to her books. Critics countered that the 2,600 books were available in reproductions at a much lower cost. "The timing was perhaps wrong and we didn't come close to meeting the fundraising expectations, but in principle the concept was a good idea," says Wissler. "The Mount is arguably the rightful place for the books."

By early 2008, The Mount had defaulted on a $4.3 million bank loan and still owed some $1.3 million for the books. "Bankers were sending their insurance men in and taking inventory to make sure everything that had been there the week before was still there," Wissler says. "It was a pretty dreadful environment."

Copeland resigned in April 2008, and Wissler was appointed her successor. An intense fundraising campaign brought in over $1 million by the end of 2008, and by this spring, the organization had struck an agreement with its creditors restructuring its debt and dramatically reducing its debt service payments. "We're not out of the woods," Wissler says, "but overall it's been a very positive year."

Wissler's long-term goal is to make The Mount home to year-round literary events. Tanglewood, one of the country's premier classical concert festivals, is nearby, and Wissler thinks the Mount will one day enjoy similar prestige in the realm of the literary arts. "If offered a job here again under the same circumstances, I would jump at it," she says. "It's been a roller coaster, but it's been a real experience. And I actually think we are going to come out the other side."

Reader Responses to The House of Worth