When the Merry-Go-Round Stopped

In 2005, when many financial analysts were bullish on the housing market and predicting higher increases in home prices, Naroff was offering a darker forecast. "We had just gotten out of the dot-com bubble," he says, referring to the collapse of the overvalued tech sector in the early 2000s. "I was telling myself this looks more like a dot-com bubble than a housing market that's sustainable."

For his perspicacity, Naroff was picked by Bloomberg News as 2008's top forecaster of the U.S. economy and in the same year received the prestigious Lawrence R. Klein Award for Blue Chip Forecast Accuracy from Arizona State University. This followed similar recognition by the National Association for Business Economics, USA Today, and MSNBC.com. 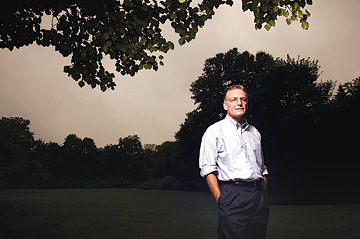 © Bill Cramer
Naroff is nationally recognized for his spot-on economic forecasts.
Naroff runs Naroff Economic Advisors out of his home in Holland, Pennsylvania, just north of Philadelphia. He is also chief U.S. economist for TD Bank. Living somewhere other than New York City, he says, gives him a healthy separation from Wall Street investors whose fortunes over the last few years depended on housing prices rising further. "If you're there hearing from all the traders, 'This thing can go on for a long time,'" he explains, "you have a tendency to take that as information that's got some validity. If you're not hearing that, you're asking the question, 'How the heck can this go on for any longer?'"

Naroff says the trick to good economic forecasting is something that can't be quantified: good judgment. "Judgment plays a huge role in forecasting," he says. His own predictions, he believes, tend to be conservative. According to Naroff, his edge is that he is unafraid to go out on a ledge and stay there. "At first [my forecast] may look like it's really negative because it's so much lower than everyone else's," he says. "Then six months later everyone is below me, and I haven't moved."

But Naroff adds that you didn't really need excellent judgment or great insight to recognize a few years ago that a housing collapse was bound to happen. He remembers being in Arizona in 2005 and learning that house prices there had risen 40 percent over the previous year. Amazingly, analysts were expecting them to rise another 30 percent in the current year. "To think that prices can rise in value by double digits—even if it's a house—for an extended period of time is unrealistic," Naroff says. "The merry-go-round had to stop."

As for the future, he remains cautious. He thinks consumers will start spending again as they become adjusted to the recession, which should lead to a five- to six-percent growth rate in 2009 going into 2010. But then, he says, reality will set in and growth will flatten out to roughly 2.5 percent for the next five years. Naroff calls that "mediocre growth": by no means a recession, but below what it's been for the last several years.

Reader Responses to When the Merry-Go-Round Stopped