Sometimes the past overtakes the present. That's what happened May 13, at a luncheon hosted by the John Carter Brown Library. Research fellow Russell Stoermer was scheduled to discuss the diaries of an Anglican minister in mid-eighteenth-century Virginia, but first he ceded the microphone to a couple of visiting eminences. 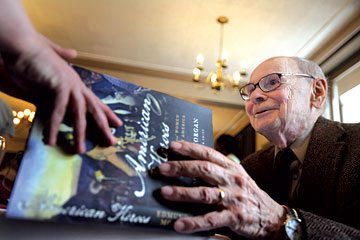 Scott Kingsley
Edmund Morgan signs a copy of American Heroes in the place his career began.
Historian Edmund S. Morgan, Sterling Professor of History Emeritus at Yale and a giant among U.S. historians, was on campus to sign copies of his new book, American Heroes. He sat at a table with Alva O. Way Professor Gordon Wood, who won the 1995 Pulitzer Prize for history for The Radicalism of the American Revolution, and Annette Gordon-Reed, who received this year's history Pulitzer for The Hemingses of Monticello: An American Family.

Morgan's books, which fill entire library shelves, are standard reading in college history courses. He has won every major prize in the field: Bill Clinton gave him a National Humanities Medal in 2001, and the Pulitzer committee honored Morgan in 2006 "for a creative and deeply influential body of work ... that spans the last half century."

Less well known is Morgan's relationship to Brown, where he taught from 1946 until 1955. "It changed my life," he said succinctly in May. He explained that he had spent 1945–46 at the University of Chicago, which at that time offered a curriculum strictly based on the Great Books. "All courses were compulsory, and they were taught by teams of people," he recalled. "The only American history course was one taught by sixteen of us, and we met weekly to discuss what we were going to teach that week. We spent many more hours [in those meetings] than we spent in the classroom. It was pretty grim as I look back on it."

Then, Morgan said, he received an offer to teach early U.S. history at Brown. "That was my field!" he exclaimed. "I jumped at the chance."

His first day on the job, he went down to the chairman's office in Prospect House and detailed his plans for the course. But his boss, clearly embarrassed, cut Morgan off. "He said, 'It's your course. As long as you call it Early American History, as it's titled in the catalog, I don't care if you teach the history of moonshine.' "

"I thought that I'd died and gone to heaven," Morgan said, fluttering his eyelids toward the ceiling.

"That is the way I remember coming to Brown."

Reader Responses to Not Just Moonshine