When Rebecca Lipkin '81 was diagnosed with terminal breast cancer, she responded by doing what she knew best—making a television news story about it. "This is going to be another adventure," she said on a segment about her cancer that aired on the Al Jazeera English network in July 2007. "I have love, I have family, I have friends," she added. "I have everything I ever wanted except for perfect health." 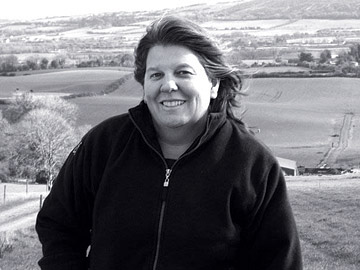 Lipkin, a highly successful TV journalist, died in July at age 48 in London, where she had been working for Al Jazeera English as director of programs. The cause was inflammatory breast cancer, a rare and especially aggressive form of the disease. "She loved and was loved by everyone with whom she came in contact, but none more than her family," her mother, Gladys, wrote on a tribute page set up on the Web for Lipkin (www.friendsofrebecca.com/blog). "I pray that all of us will remember Rebecca as the smiling, involved, brilliant individual and journalist and not concentrate on this sad end."

Lipkin's journalistic career spanned nearly two decades. Soon after she graduated from New York University's graduate journalism school in 1981, she went to work as a news producer for WABC-TV in New York City. From 1991 to 2001 she worked as a staff producer for ABC's World News Tonight, producing numerous stories for the "American Agenda" and "A Closer Look" segments. She moved to London in 2001 to work for Nightline, coordinating the acclaimed news show's coverage of Europe, the Middle East, and Africa. She then went to Al Jazeera, where she started the Arabic network's English programming.

Lipkin discussed her illness on a blog maintained by National Public Radio. "Six months after the jubilation of finishing my treatment," she wrote in October of 2008, "I noticed some discoloration along my chest wall. My worst fears were realized. I had a recurrence." In another post, she wrote, "I am the same person I was on the day of [my] diagnosis—an energetic, social, hardworking person. I'm the same person only with a form of cancer that has a pretty awful prognosis."

In 1999, the International Center for Journalists awarded Lipkin a Knight International Press fellowship, and it has since established a fund in her memory to provide training and resources for television journalists in countries where broadcast media are just taking root. To donate, go to www.icfj.org/donate.

Lipkin is survived by her mother, a brother, and a sister.