On the second-to- last row of the Periodic Table of Elements is a group of little-known elements with strange-sounding names like ytterbium, erbium, and europium. "They sound pretty foreign to people, but they are actually some of the most common light emitters in the world," says Rashid Zia '01, now an assistant professor of engineering. These elements, collectively known as lanthanides, are used in light bulbs, lasers, televisions, and fiber-optic systems. 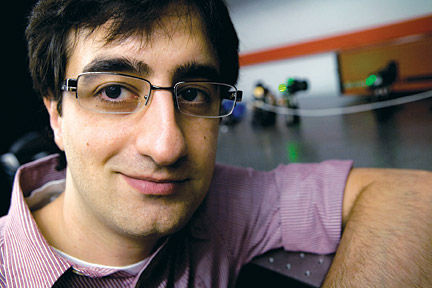 Zia's research focuses heavily on using lanthanides to boost the efficiency of a variety of light-emitting devices. Working with nanotechnology at the level of the atom, he looks for ways to control light as it's absorbed by and then emitted from a lanthanide. He hopes to discover methods to switch the light on and off, speed it up and slow it down, and, with pinpoint accuracy, alter its color. In July, Zia won a Presidential Early Career Award for Scientists and Engineers, a White House honor given to exceptionally promising young researchers. Over the next five years, he will receive $1 million in grant money, a large portion of which he will put toward studying lanthanides.

Zia wants to use lanthanides to replace existing household light bulbs. Though the light bulb has become a symbol of inspiration, it's "not really a smart idea at all," Zia says. Only about five percent of the electricity that runs into a bulb is transformed into light; the rest is emitted as heat. "The light bulb is a big heater that happens to give off light as a by-product," Zia says. "It's the most inefficient technology in the modern home."

Zia's hope is that someday light bulbs will contain a small amount of a lanthanide, enabling them to transform electricity into light far more efficiently. One strategy is a nanophotonic device inside the bulb about one one-hundredth the diameter of a human hair. The device would modify the immediate area around the lanthanide for maximum efficiency. "At every step of our lives, we depend on light," says Zia. "This is really about studying a new way that light can be emitted."