Sometimes you can go home again. After men's hockey head coach Roger Grillo resigned last June, Director of Athletics Michael Goldberger turned to former defenseman Brendan Whittet '94, who'd been toiling as an assistant at Dartmouth for the past eleven years. 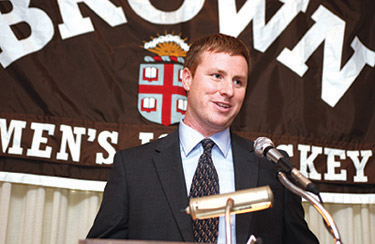 David Silverman
Whittett at the July press conference introducing him as head coach.
"It is my dream job," says Whittet, who was introduced as head coach at a press conference on July 30. "When I got into coaching fifteen years ago, I always had in my mind the ultimate goal of going back to Brown as the head men's hockey coach. I love the place and I'm excited to have a chance to lead the men's ice hockey program."

Whittet enjoyed great success while playing for Coach Bob Gaudet's Bears from 1990 to 1994, during which time the team won an Ivy League title, traveled twice to the ECAC Final Four in Lake Placid, and earned an at-large bid to the NCAA Tournament.

"My vision," Whittet says, "which I know is going to be reality because I lived it as a student-athlete, is to have a program that is about excellence in everything. Brown University is one of the best academic schools in the world, and I want to see the correlation with the men's ice hockey program."

"Brendan is a great guy and an excellent coach," Gaudet says. "He had a wonderful experience at Brown as an undergraduate and cares deeply about the school and the hockey program. He wants to be there, and that passion and pride he feels for Brown and Brown hockey will be transferred to his players. Brendan will develop a team that alumni, students, and people in the community will be proud of."

"I am confident," Goldberger says, "that Brendan will bring excitement and enthusiasm to College Hill that will be contagious. We are in for a wonderful new era in Brown hockey."