Having won two Ivy titles in the past four years, head coach Phil Estes has raised expectations. Despite the vagaries of college football, where talented players graduate each year, Estes has kept his team near the top of the league. This season, he will need to replace several All-Ivy players. 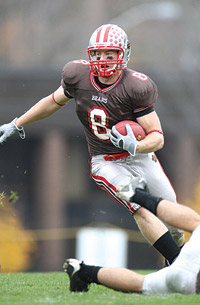 "We have some holes to fill," Estes notes, "but I'm very confident with the guys we have."

Coming from another coach, such a comment might seem unduly optimistic. Coming from Estes, it doesn't seem so far-fetched. A good recruiter, he has stocked the wide receiver and defensive linemen positions with elite talent and has a number of other skilled players looking for a chance to step into bigger roles.

Returning will be ten starters, including six All-Ivy players. The greatest loss has been the departure of All-Ivy quarterback Michael Dougherty '09. "You don't replace a great quarterback," Estes says. "You try to find somebody that is going to have his own niche."

Four contenders were vying for the job as the opening game approached, but none had thrown a pass in a varsity game. Joe Springer '11 is the most experienced, having been a late-game replacement against Dartmouth last season and a regular in junior varsity games. "He has a strong arm and a great grasp of the offense," Estes says. Patrick Pakan '12, an excellent runner, and Ryley Hegarty '11, an accurate passer, were also in the mix.

By the time the season opened in Stony Brook, New York, on September 19, Kyle Newhall-Caballero '11, a physical and a strong runner, had won the job. Against Stony Brook, Newhall (as he's known) threw three touchdown passes, as the Bears lost, 21–20, on a missed point-after conversion. Six days later against Harvard, Newhall led the team to a 24–21 loss after failing on two tries to pass the ball into the end zone from the Crimson twenty-five yard line during the final seconds of the game.

Newhall has the luxury of throwing to one of the best receiving corps in the country: All-American and All-Ivy wideout Buddy Farnham '10 and All-Ivy and preseason All-American receiver Bobby Sewall '10. Farnham, a two-time first-team All-Ivy selection, led the league in receptions as a sophomore and ranked third last season with sixty-three catches.

"Farnham is everything you want in a football player," Estes says. "He reminds me so much of Sean Morey '99 in his work ethic, how he approaches the game, and how he watches film." Farnham also ranked third in the Ivies with 816 receiving yards and placed second with 149.5 all-purpose yards per game.

Sewall has been Mr. Versatility, confounding defenses with his ability to catch, rush, or pass the ball. "He can take over a game and make big plays," Estes says. Last season Sewall was ninth in the nation with 6.9 receptions per game. He ranked fourteenth nationally with 94.80 receiving yards per game. A first team All-Ivy and All-New England selection, he led the Ivy League in receptions (69), receiving yards (948) and scoring (8.4 points per game). He scored fourteen touchdowns, eight receiving and six rushing.

"With Farnham and Sewall, it is very hard for teams to focus on one guy," Estes says. In addition to their receiving duties, both Farnham and Sewall are on special teams, helping give the Bears one of the most explosive return tandems in the league. Joining them in what promises to be a deep receiving corps is Matt Sudfeld '11, who had twenty catches for 181 yards last season, and Trevan Samp '10, a big-play receiver with excellent speed and leaping ability, who had twelve receptions for 190 yards and two touchdowns.

All-Ivy tight end Colin Cloherty '09 has gone on to sign with the Indianapolis Colts, and several players are trying to replace him. Alex Prestley '11, a 6-foot-7-inch, 255-pound tight end, is a strong blocker, which should help the team's running game. Andrew Fertig '10, at 6 feet 4 inches and 250 pounds, is a solid receiver, and logged some varsity experience last season when the Bears utilized two tight end formations. 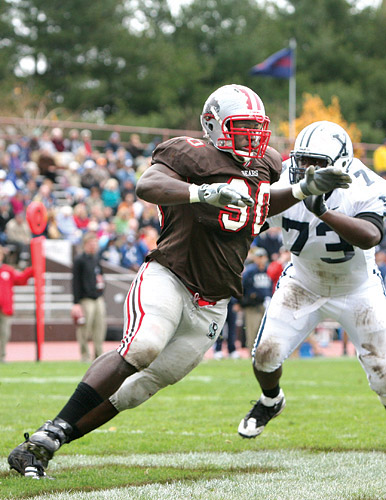 Although the passing game has been a hallmark of Brown offenses under Estes, the coach is trying to develop a more balanced attack. "My biggest thing is trying to get a running back," he says. "Everyone is talking about how important the quarterback is. I think it will be more important to find a running back. I can groom a quarterback with the two receivers I have if I have a very good running back behind him."

With the loss of fifth-year senior Dereck Knight '09 to graduation, Estes will look to Zach Tronti '11 to take over that position. "He had a good spring, and we are excited about Zach and what he can do for us," Estes says. "He is a powerful runner as well as someone that has some speed and can be very elusive."

Daniel Ball '11 will also see time in the backfield after playing in eight games and gaining forty-five yards on fourteen carries last season. Fullback Matt Mangiacotti '10 is back after playing in nine games last year.

The Bears' second area of strength on offense, after wide receiver, will be the offensive line. Right tackle Paul Jasinowski '10, a first-team All-Ivy pick in 2008 and team cocaptain, will anchor the unit. "I look at him as the voice of the offense," Estes says. "He is the guy that sets the tone for us as far as his aggressiveness. He fears nothing. He is the strength of that offensive line."

Mark Callahan '10 is one of the top centers in the Ivy League, according to Estes, while right guard Tim Danser '10 is another experienced lineman with good feet. Patrick Conroy '11, at 6 feet 3 inches and 260 pounds, will most likely start at left tackle. Brian Ellixson '11, who is 6 feet 2 inches and weighs 285 pounds, has the edge to start at left guard.

The strength of the Bears defense is up front along the defensive line, where Estes can rotate several players. James Develin '10, a 6-foot-3-inch, 260-pound defensive end, had thirty-four tackles last season and earned second-team All-Ivy honors.

"Jimmy Develin is probably one of the most dominating football players in the Ivy League," Estes says. "He has one of the best attitudes that I have seen in a long time. He is a complete football player. He loves the game. He has such a passion for it when he puts that helmet on. He paints his face up, but he goes out there to play." Clayton McGrath '11, Brian Neff '10, and Jeffrey Matteis '12 will see time at the other end.

In the middle of the line, Estes has 6-foot-3-inch, 270-pound tackle David Howard '09, who has been named a preseason All-American by several organizations and who was a first-team All-Ivy pick last season. "David Howard is immense. He is big, strong, physical, and he loves the grind in the middle," Estes says. Michael Lemmons '10, Will Rulifson '11, and John Anderson '11 will join Howard at the other tackle spot.

Brown is a bit young in the linebacker position, but the players are not completely inexperienced. On the inside, Estes is looking to Kelley Cox '10, who was ninth on the team last year with thirty-three tackles. Andrew Serrano '11 played in all ten games last season and made twenty-two tackles. Chimso Okoji '11 and Brendan Gallagher '10, who made fourteen stops last season, is also looking for time on the inside. Robert Gillett '11 is taking over at strong outside linebacker, and Phil Roffi '10 will be the likely starter at the other outside linebacker spot.

In the secondary, Brown All-Ivy free safety Chris Perkins '10 is back. The hard-hitting Perkins registered fifty-five tackles last season, which ranked third on the team and is the most among returning players. David Clement '10, who had thirty-eight tackles last season, returns at cornerback, and Russell Leedy '11, who played in seven games and made four tackles, has the edge to take over at the other corner.

The Bears need to replace first-team All-Ivy punter Robert Ranney '09 this year, but there are some other new wrinkles on special teams. Always the innovator, Estes is changing the team's punting game to a rugby style—in which the punter kicks the ball while moving—a strategy that he hopes will eliminate long returns. The University of Florida used it last season with great success, and Estes expects to see other teams transition to it in the near future.

Nate Lovett '12 beat out Patrick Rooney '11 as punter at the start of the season, while Drew Plichta '10 is expected to be the kicker for field goals and extra points. Del Thomas '11, Plichta, and Rooney are all in the mix for kickoff duties.

"I think that we're going to surprise a lot of people. I think a lot of people have written us off," Estes says, adding that the Bears have been underestimated before. This group of players, he says, "is hungry to get another ring. These guys saw what this group of seniors did—they had two rings on their fingers by their senior year.

"It is not going to be easy, but I think we have some very good talent in certain areas that can carry this football team."

Neuroscience 10 continues to tickle the grey matter of future scientists—and everyone else.
First Person 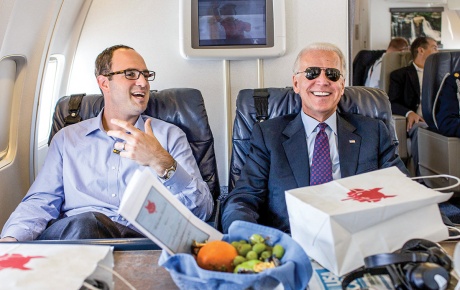 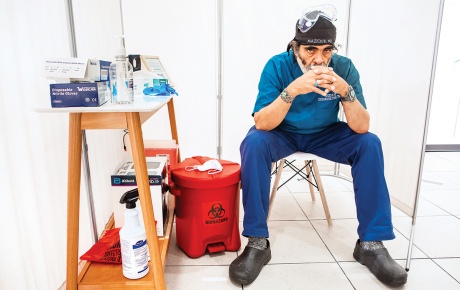 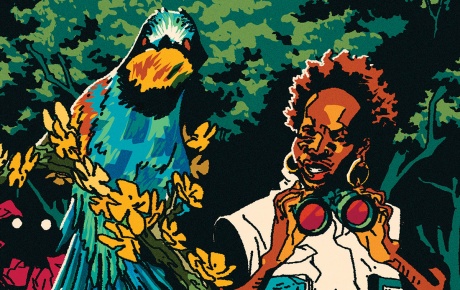