On December 26, 2004, social worker Martha Fraad Haffey ’65 was en route to Indonesia when the pilot made an announcement. "Something has happened in Indonesia," he said, "but we don't know what." When the plane landed in Jakarta an hour and a half later, Haffey learned that an earthquake off the western coast of the country had triggered a series of tsunamis. Waves up to 100 feet high had flattened buildings, erased coffee fields, and killed approximately 230,000 people. It was the second-largest earthquake in recorded history and one of the worst natural disasters ever. 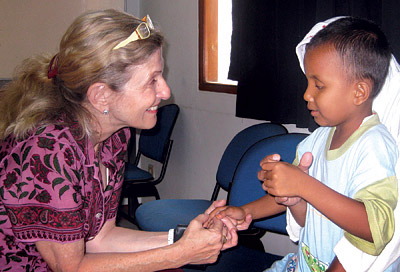 Courtesy Martina Fraad Haffey
Haffey is helping Indonesia ramp up its child welfare programs.
Haffey was in the country as part of her long-standing collaborations with local social workers throughout Indonesia. Now she joined them in aiding the people in Aceh, a province on the island of Sumatra that had been the hardest hit. Over the next five years she would help establish a social-work system in Aceh that has not only aided the tsunami victims, but also deals with such issues as sexual abuse, poverty, and child trafficking.

It was quite an accomplishment for a woman who'd spent most of her career working in Manhattan. "To me," she says, "it felt like I was starting out as an infant. I knew nothing."

Before taking her first trip to Indonesia in 1995—a vacation to visit her sister, who was employed there—Haffey had worked for two decades as a professor of social work at Hunter College, part of the City University of New York. Soon she was taking a professional interest in the country and returning periodically. Curious about how social work was taught there, in late 2000 she met with faculty members from two Indonesian social-work schools.

She says, "I went to find out what they were doing, what their curriculum was—just to get an impression of what social work was in Indonesia." What she learned shocked her. The textbooks were from the 1970s. The library had few books, and computers were hard to come by. It was as if the advances in her field of the last thirty years had simply passed Indonesia by. "There was no system there at all," Haffey says. "Children are put in institutions that are not monitored by the government, so no one really knows what happens in them." She says her relationship with her Indonesian colleagues was faintly colonial at first, as if she were the smart American coming in to help. But after she spent a year in Indonesia on a Fulbright scholarship in 2003, she explains, "it became much more of a mutual exchange."

Their relationship became most useful after the tsunami. Working with an Indonesian professional organization, she began training local social workers to aid the survivors. In June 2005, she went to Aceh herself. "They had cleaned up a lot of the bodies and debris," she recalls, "but people were living in barracks and tents. There were certain areas that were still underwater. There were all these stories where people couldn't stop talking about what happened to them. Some people had been up in the trees holding on and could see their relatives being washed away."

By now Haffey's sister had set up Building Bridges to the Future, a foundation focused on rebuilding rural villages in Aceh. Haffey formed a subgroup called Building Professional Social Work in Developing Countries, whose purpose is to aid social workers in all developing countries. It began by helping Indonesian social workers working in remote parts of Aceh. Haffey eventually expanded training to focus on many of the social issues that had plagued Indonesia before 2004, immersing herself in the intricacies of Indonesian culture. Child labor, for example, wasn't just condoned; it was an economic necessity. Haffey had to adjust to a culture that emphasized community at the expense of the individual, the opposite of the dominant culture in the United States.

Haffey is now helping the government overhaul its child-welfare services. In the past, children who lost their parents or lived in an abusive or impossibly poor family were automatically placed in orphanages. Thanks in part to Haffey's efforts, the government now tries to prevent abuse, and uses orphanages only as a last resort.

"The biggest challenge for me has been working in a culture that is so very different from my own," Haffey says. "Trying to understand what is going on is like putting oneself in a different reality. I am never sure of the ground I am walking on."