I remember running through the woods. My blue silk dress was getting caught in the brush as I made my way from the dance hall at my private girls' school in Simsbury, Connecticut, to the parking lot. Through the trees I could see my father's car racing up the school driveway. 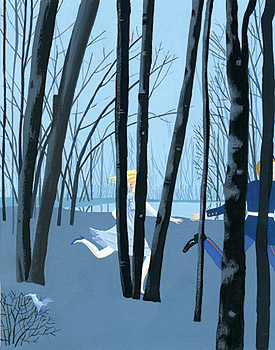 I pulled off my shoes, which kept getting stuck in the damp spring ground, and Billy (not his real name) held my hand to steady me. We were running to his car.

I didn't start crying until we reached the main road and were certain my father hadn't followed us. Billy lit a cigarette and shook his head. Neither of us could believe the night had taken such a wrong turn, that my senior prom had spiraled into a disaster that was, we knew, only just beginning.

At my high school a rite of passage was booking hotel rooms to use after prom. Most parents understood, to some extent or another, that we had all lied about where we would stay that night, that we would dance and drink and party together, sleep four to a bed, then get up, go home, and face the last summer before college.

But my story was not that of the typical graduating senior. How that night eventually led me to Brown still amazes me more than twenty years later.

I'd met Billy the summer before my junior year. He was beautiful and irreverent, and the attraction was as instantaneous as my parents' concern. They had high hopes for me to attend an Ivy League school. I was the straight-A student, the competitive figure skater who had just given up the sport to devote myself to my education. The summer I met Billy I still had two years to fill out my already glorious résumé, master the SATs, and fulfill my destiny. Billy did not fit into the equation.

None of this mattered. We were in love, that crazy hormone-induced teenage love that will not be denied. Not by parents. Not by the distance between our schools. Not even by the greater distance that became obvious when he suddenly joined the U.S. Marine Corps at age seventeen. I did what I had to do. I got my high grades, did my extracurriculars, started my college search. And in the spring of my senior year, I got engaged to my marine boyfriend.

My parents had one reaction: terror. And the terror grew as the acceptance letters began to roll in. Of the eleven schools I applied to, nine accepted me. And one of them was Brown. The Ivy League. I understood well what this meant to my family. My grandparents had been immigrants who struggled to live the American Dream, to give to their children what they did not have with the understanding that those children would, in turn, give their own children even more. Even though neither of my parents had finished college, my father had managed to land a job on Wall Street and work his way up the ranks. I remember the progression of affluence well, the small houses getting bigger, the Ford Pinto traded in for the Cadillac, and my older sister going off to college. It was my turn to do my part, and I was failing miserably.

There's no question I was drawn to Brown. Nestled in the hills of Providence, with its historic buildings, traditional Green, and smart and creative student body, it felt important. But Billy was stationed down South, and I had offers waiting for me there. I was torn between my love for him and a family history ingrained in me from before I could remember.

The after-prom plan was the last straw for my parents. I was on the dance floor with Billy, my bare shoulders pressed against the stiff fabric of his uniform, when the chaperone pulled me aside. My father was on the phone, screaming. His every fear about my future burst into anger about this one small thing, this thing that should not have mattered, and his words were more hurtful than they might otherwise have been. I, too, had been holding back my own anger, and now I unleashed it into the receiver. I grabbed Billy and told him we needed to run.

And so we were, running through the woods to his car. We got to his house half an hour later to find his parents waiting with a police officer. My father had called ahead and told Billy's parents he was coming after me. With my father's anger vividly apparent, they were afraid of what might happen. When he arrived, there was little discussion. Thinking I was the one who had called the police, my father was beside himself. He gave me two choices: come home with him now or be forever disowned by the family. But it was a choice I did not want to make. Between his anger, my anger, my devotion to Billy and the feeling that my entire life was unraveling before my eyes, I could not get into that car.

And so it came to be that I was disowned. I moved into an open dorm room at my school, and they let me finish my last three weeks without charging me for room and board. Billy went back to his base in Mississippi, and I graduated without my parents in attendance. I spent the rest of the summer living with Billy's kind parents, working at a sandwich shop, and scrambling to apply to a state university. I was not able to see my three younger siblings, my mother, my older sister, or, needless to say, my father.

What I did not know was that my mother had filled out the form to accept the admission offer from Brown. Near the end of the summer she came to me with a formal, written proposal. She and my father would pay for college if I agreed not to marry Billy until after I had graduated from Brown. I had become so detached that I turned down the offer. The summer was almost gone, and I still did not know where—or even if—I would be going to college.

A week before school started, my mother visited me again, this time without a formal document. This time, she said, she and my father were willing to pay for Brown and see how things went. I was eighteen years old and I had a decision to make, one, it turns out, that went far beyond the choice of where to attend college.

In August 1985, I packed up my car and drove north to Providence. I quickly settled into my room in the West Quad with my new roommate, who would become one of my closest friends. We positioned our enormous wooden desks face to face so we both had a view out the window, and we sat there for a long time after her parents had left, taking in our new surroundings and talking. Jenny was also from Connecticut and fresh out of an elite coed boarding school. She was a sailor and planned on joining the sailing team that fall. She had no boyfriend and didn't seem to want one. She was premed. And, she said, she was going to be the most renowned neurosurgeon in the world.

Our unit was number eight, and two brilliant guys down the hall had cleverly coined what would become our ironic unit motto for the year: Eight is Good. They constructed a beer-delivery system from the mini-fridge on one side of their room to a bed on the other. It included cardboard mailing tubes, duct tape, and a sophisticated design powered by nothing but gravity. Across the hall from them were the daughter of a famous movie actress, a gorgeous Swede, and a sophisticated Brit on whom I would have a crush for most of the year.

With my tiny diamond ring and long blond hair (which I curled with old-fashioned rollers) I felt, for the first time in my life, like a country bumpkin. In my small town, figure skating had made me a celebrity, and in my small school I had been a top student. At Brown, I just felt small. Looking back, I'm sure I wasn't alone.

I settled into my economics classes and enjoyed the incredible academic freedom that the school entrusts to its students. My grades were good, and in spite of my complete lack of worldliness I formed many close friendships. I also began to reconcile with my family. I was realizing that my life was moving in a direction away from Billy. By Christmas we'd broken off our engagement.

Over the next four years, I continued to change and grow. Sophomore year I lived off campus with friends. I decided to concentrate in economics. From my friends and Brown's diverse culture I absorbed confidence, creativity, and new views of the world. Outside the classroom, I learned about feminism and semiotics and self-expression. Junior year I studied in London and traveled around the world. In the decades since graduation, I have been an investment banker, a lawyer, an activist, a mother, and an author, and all this came largely out of the confidence and desire to learn and grow that I developed during my years at Brown.

But it was Billy who first taught me about love. During all the years and all the changes, I still thought of him from time to time. I found him recently on Facebook. He is happily married and living the independent life he always wanted. We swapped memories, and I was finally able to try to explain the choice I'd made and feel a kind of closure. We are not the same people we were all those years ago running through the Connecticut woods. There is a definite sense of peace in knowing that we have each found happiness in our lives.

However, there are times when I can still feel Billy's hand holding me up as I pull my shoes from the mud. I can't help wondering what life might have been like had I made a different choice when I was still a girl. What if I had gone South to be with him, to follow love at all cost? Would we have found the same kind of happiness together that we have found apart? Or would I have grown into a radically different but equally content woman? Life is always about choices. The older I get, the more I understand this, accept it as truth, and bow down to the curious forces we feel nudging us down another fork in the road.

Wendy Walker is the author of the novels Four Wives and Social Lives, and an editor of Chicken Soup for the Soul: Power Moms. She lives in Connecticut and is raising three sons.

Reader Responses to Running Through Woods