On September 3, 1803, the Corporation of what was then called Rhode Island College put out an appeal for donors, voting as follows: "That the donation of $5,000 Dollars ... shall entitle the donor to name the College." 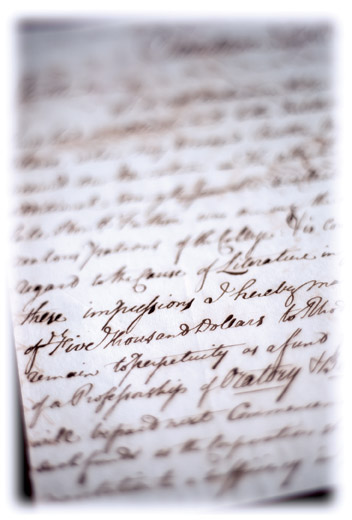 Nicholas Brown Jr., class of 1786, answered the call. On September 4, 1804, he dispatched the letter at right. "Gentlemen," he wrote, "It is not unknown to you that I have long had an attachment to this Institution as the place where my deceased Brother Moses and myself received our education."

Nicholas continued: "This attachment derives additional strength from the recollection that my late Hon d. father was among the earliest and most zealous patrons of the College & is confirmed by my regard to the cause of Literature in general." Indeed, his father, also named Nicholas, had served Rhode Island College in the eighteenth century as a builder, benefactor, and treasurer.

To purchase naming rights, young Nicholas gave the College $5,000 to endow a professorship in oratory and belles letters in perpetuity, and in exchange the University has since borne his name, also in perpetuity.

The original letter remains in the University Archives in the John Hay Library, but it has been scanned and you can now read it online at the Center for Digital Initiatives (http://dl.lib.brown.edu/index).

Reader Responses to The Name Game