If Franz Schubert's lieder captured the romantic yearnings of nineteenth-century Europe, Gabriel Kahane's compositions have tapped the wierdness of twenty-first-century desire. His song cycle Craigslistlieder is classic in its form, but the lyrics come straight from personals ads. "You looked sexy even though you were having a seizure," he sings of a chance encounter in Walgreens. "I was the guy in the blue shirt holding your legs while that old man put his wallet in your mouth. Let's get together when you're feeling a little less woozy." 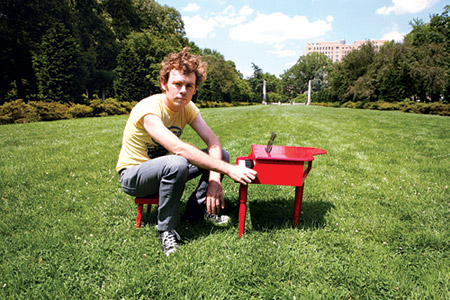 Ph credit here
Kahane writes hip chamber music that defies categorization.
Kahane ’03 puts a little bit of everything into his music, creating a genre-defying, often whimsical art pop. His self-titled CD, released last year, ranges instrumentally from horns and percussion to the mandolin work of newgrass phenom Chris Thile, a mix that has won Kahane several commissions and both critical and popular acclaim. The New Yorker's Alex Ross wrote that Kahane's " sonorous, mesmerizing baritone ... brings to mind Sinatra in his wee-small-hours mood," observing that "Sinatra, of course, would have charged more than ten dollars" for admission. Indeed, Kahane is unusual in that he has as many fans in New York City's Lower East Side bars as he does in uptown concert halls.

Few contemporary musicians bring as much to their art as Kahane does. He took up piano at age seven, studied jazz piano at the New England Conservatory, and transferred to Brown. "The things that have defined me artistically tend to be only tangentially related to music studies," he says. "My English lit professor Timothy Bewes was trying to turn me on to a Derrida essay about how the frame of the text informs the content itself. At twenty-one, my mind was somewhat blown. The application to what I do is the idea that you can make sophisticated quasi-art music and play it in a bar and people will receive it in a totally different way than if you play it in the oppressive confines of a concert hall."

Kahane made his first real foray into music composition as a Brown senior. "Every year Brown produces a student-written musical," he explains, "and I was coerced by a classmate, Thomas Beatty '03, into writing a musical and submitting it." The two collaborated on the show Straight Man, which took top honors at the Kennedy Center's American College Theater Festival in 2002. "That set me on the path of songwriting," Kahane says.

He and Beatty bonded in an acting class, where they discovered that they were both "living in the shadows" of their fathers, Kahane says. Beatty's father is acclaimed actor Ned Beatty, and Kahane's is classical pianist and conductor Jeffrey Kahane. Despite the genes, Gabriel Kahane was not always bent on a career in music. As a teenager he aspired to be a professional chess player. Only after graduating from Brown and moving to Brooklyn, where he still lives, did he realize he would devote his life to music. "That's when I started in earnest to try to cultivate a voice," he says.

These days Kahane splits his time between writing for himself and composing and arranging pieces for others. "A big swath of my work has been as a composer of chamber music," he says. This year saw the debut of For the Union Dead, his song cycle based on the poetry of Robert Lowell, as well as a piano sonata for a young Russian pianist named Natasha Paremski. Kahane is now working on a musical, February House, which was commissioned by the Public Theater in New York City. It's about a 1940 Brooklyn Heights arts commune that included W.H. Auden, Benjamin Britten, Jane and Paul Bowles, Carson McCullers, and Gypsy Rose Lee.

Kahane's no longer worrying about his father's shadow. In April, Jeffrey Kahane premiered Gabriel's Django: Tiny Variations on a Big Dog at Alice Tully Hall in New York City. "We had played together before in public," Gabriel says of collaborating with his father, "but it was the first time that I was sitting in the audience listening to him play something I'd written specifically for him. It was a moving experience."

Simone Solondz is a freelance writer in Providence. You can hear Gabriel Kahane's music at www.gabrielkahane.com.