"Here in America, you write your own destiny. You make your own future," President Barack Obama said in his much-discussed September 8 address to millions of U.S. schoolchildren. "That's what young people like you are doing every day, all across America—young people like Jazmin Perez ’09, from Roma, Texas." 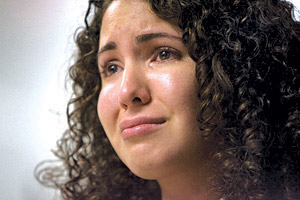 AP Photo/Houston Chronical, Johnny Hanson
Perez weeps while watching Obama's speech.
Perez, who graduated from Brown last spring, was watching the president's speech on television when she unexpectedly found herself in tears. "After [Obama] mentioned me," she told the Houston Chronicle, "it was a blur. Then I flashed back to everything that's happened since high school ... how hard it was."

"Jazmin didn't speak English when she first started school," Obama told the nation. "Hardly anyone in her hometown went to college, and neither of her parents had gone either. But she worked hard, earned good grades, got a scholarship to Brown University, and is now in graduate school, studying public health, on her way to being Dr. Jazmin Perez."

At Brown, Perez concentrated in human biology and education studies, and this fall she began a master's in public health at the University of Texas Health Science Center with the ultimate goal of becoming a physician. How did she end up in a presidential address on national television?

"Two of my former high school English teachers, Eric Kinney and Dan Defossey, recommended me," Perez explains. Both teachers were advisers to a student theater group in which Perez was active, and Defossey, in fact, is responsible for pointing her toward Brown, which Perez admits "wasn't on my radar" when she began considering places to apply.

"Dan had been doing some research about colleges and told me Brown would be a good place for me," Perez says. "He said the curriculum was flexible and students are happy."

Professor of Biology Kenneth Miller '70, who was Perez's academic advisor, says she contacted him the day before the televised address to tell him that Obama planned to mention her. "Jazmin comes from the little town of Roma, right on the Rio Grande," Miller says. "It is not an area you expect to find many students headed to the Ivy League." He recalls that Perez's hard work and focus helped her overcome some deficits in preparation during her first several semesters at Brown. "She is very determined," he observes with a laugh.

"Jazmin is full of energy," echoes Jodie Gill, of the Brown mentoring program Women in Science and Engineering. In Roma, Perez had volunteered at a community center and, Gill says, "The life experience and insight she brings to ... women students is nourishing without being overbearing."

Suzanne M. Rivera '91, associate vice president for research at the University of Texas Southwestern Medical Center, came to know Perez's work ethic first-hand when the then-Brown undergraduate contacted her about potential summer and winter-break work in Rivera's office. "Her initiative and self-confidence immediately impressed me," Rivera recalls. "I hired her after a single phone interview, and it was one of the best decisions I have ever made." Pleased with Perez's work in the office, Rivera hired her as a research assistant on a study examining whether racial and ethnic minorities have equitable rates of access to and participation in clinical trials.

Perez hopes her story will inspire other students. "I hope [they will] know that someone has been in their position," she told Houston television station KHOU, "and actually feel encouraged and motivated to ... stay in school and work hard."

Already she has influenced at least one student from tiny Roma, Texas, to follow in her footsteps. "I used to go home during vacations and speak to students at my high school about Brown," Perez says. Several have applied, and one, Luis Solis, is now a sophomore on College Hill.

Reader Responses to Yes, She Can (And She Did)