When Lauren Oakes moved to Bristol Bay, Alaska, in 2006, she did so for the fish, not the people. A Brown environmental studies and visual arts concentrator who'd studied film and photography at RISD, she joined Trout Unlimited Alaska in Juneau. Her job was to help gain permanent protection for Bristol Bay, home to the world's largest remaining sockeye-salmon fishery. This irreplaceable resource, she says, is at risk from plans to build the Pebble Mine, which promises to be one of North America's largest gold, copper, and molybdenum mines. 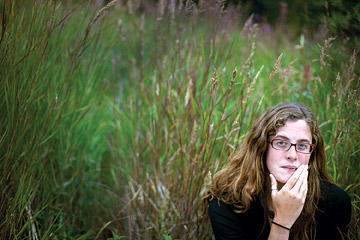 Ben Knight
In Alaska, Lauren Oakes learned that much more was at stake than fish.

Once in Alaska, Oakes quickly came to understand that much more was at stake than the bright-red, hook-jawed spawning sockeye. For the people of Bristol Bay—whether native subsistence fishermen or guides who serve well-heeled recreational anglers—salmon fishing is a treasured way of life, a tradition deeply engrained in culture and family lives. To tell the story of these locals, Oakes and two colleagues at Felt Soul Media coproduced the beautiful hour-long documentary, Red Gold, in 2008, a multifaceted tribute to fish, fishermen, and the rich but fragile environment of the Bristol Bay watershed.

The Pebble Partnership, composed of Vancouver-based Northern Dynasty Minerals Ltd., and Anglo American, an international mining corporation, holds the rights to the world's largest deposit of copper, gold, and molybdenum. Interviews with company geologists leave no doubt about the project's scale and dollar value: estimates now stand at $345–$500 billion. The Pebble Mine, according the filmmakers, will be similar to the Bingham Canyon Mine outside Salt Lake City, and to illustrate their point they offer dramatic aerial footage of this Utah cousin.

An easy winner at recent documentary film festivals (Red Gold took both the director's-choice and audience-choice awards at Telluride's Mountainfilm and the audience choice prize at BANFF), the documentary doesn't pretend to be even-handed or objective. To the filmmakers, mining is all about money and fishing is a traditional, family way of life. The trouble with this rather simplistic view is that most of the netters who harvest sockeye in the bay do so because they can make very good money at it. Conversely, successful mines depend on the backbreaking work of miners—human beings with long traditions and deeply involved families of their own. Not surprisingly, then, when the PBS series Frontline expressed interest in broadcasting Red Gold, the show's executive producers asked Oakes and her colleagues to add more depth, context, and objectivity. So, Oakes says, "We went back to the drawing board."

They spent last summer shooting additional footage, conducting interviews, and researching the track record of hard-rock mining, the permitting process, and the need for resource development. This fall, Oakes began an environmental studies doctoral program at Stanford, and Frontline editors took over the project in Boston. They anticipate airing the new version, Alaska Gold, in 2010; a website will include interviews, maps, and still photographs. Those too impatient to wait can find the original film online at redgoldfilm.com. Although far from impartial, it's a must-see for anyone interested in the future of America's coastal fisheries.