In the November/December 2008 BAM, senior writer Lawrence Goodman profiled four of Brown's alumnae pioneers, four centenarians from only the second generation of women to attend the Women's College in Brown University. Among them was Ruth Lubrano, who, as high school was coming to an end, asked her father if he had any plans for her. She was surprised when he answered, "Well, of course, you are going to college." Lubrano, Rhode Island's oldest resident, died August 9 in Providence. She was 107. 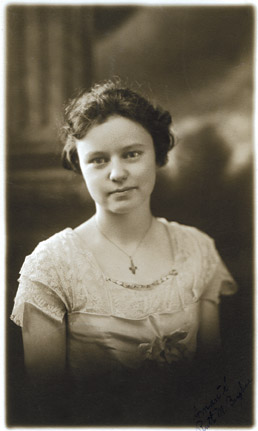 Courtesy Lubrano Family
Pembroker Ruth Bugbee.
And so it was that Lubrano went off to Brown in the fall of 1919. At Brown, she met her husband, Jack Lubrano '24, '25 AM, a fellow student in her physics class. (Lubrano died in 2001 at age 102.) Ruth was known for her cheerfulness on campus. "If you have ever seen her when she isn't happy," a classmate wrote at the time, "keep it to yourself for nobody is going to believe you."

After graduation, Lubrano became a social worker at Rhode Island's state institution for the mentally ill. After David Lubrano '52 was born, she spent the next several years caring for him before returning to work to become the head of social services at the Rhode Island Maternal Health Clinic and eventually an assistant director for the Rhode Island Social Services Department. She was, her granddaughter Kathryn Lubrano Robinson '91 says a pioneer of flexible working hours.

After retiring, Lubrano served as president of the Cranston Library Association and was a member of Hamilton House, the American Association of University Women, and Central Congregational Church in Providence. Shortly after turning 100, she told the BAM she would now be mastering e-mail to communicate with her family. "I don't want my great-grandchildren to get ahead of me," she said

When Goodman asked Lubrano the secret of her longevity, she replied that she never let her emotions build up within her. "I loved to spit things out if something was bothering me," she said.

She is survived by a son, David '52, a trustee emeritus; five grandchildren, including Kathryn Robinson '91; 11 great-grandchildren; a brother; and several nieces and nephews, including Eunice Bugbee Manchester '52.