His story was straight out of a movie: by day, Jihan Bowes-Little was vice president for the European-credits rating desk at Goldman Sachs and one of the most senior black bankers in the firm's London office. By night, he was Metis: a rapper, MC, and spoken-word artist making a name for himself in the city's underground hip-hop scene. No one at Goldman knew about his rapping, and no one in the music world knew about his day job. 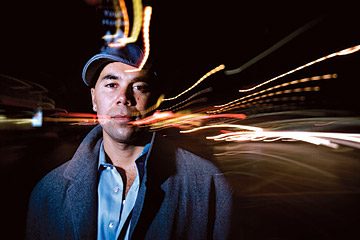 Phil Sharp
Jihan Bowes-Little is trading in his banker's grey for the fast lane in Los Angeles.
Late-night gigs meant going directly from work to clubs, but Bowes-Little couldn't be caught crossing the trading floor in his hip-hop gear. Nor did he "want to show up at these underground urban venues in an Armani suit," he says. So he'd change in the back of taxis. By the time he reached his destination, he recalls, "I was transformed."

Now Bowes-Little is aiming to make his story literally straight out of a movie. He has written a memoir—the working title is The Trade—which his agent is shopping to publishers, and he is negotiating film rights as well. In addition, Metis plans to release his first EP, "The Path," this winter and a full album next year.

The son of an interracial couple, Bowes-Little grew up in working-class suburban California, and was the first in his family to go to college. At Brown he studied philosophy, "which is what my passion really was and is," he says. "But I also did economics, because that's how the world works." He took a job in investment banking as "a means to an end," he says. "I had to put some money away and help my parents out. I went to Goldman mainly because it would teach me a lot and give me the opportunity to do what I wanted to do later on." Even as he moved up in the ranks, from the principal finance division to the elite proprietary trading desk, Bowes-Little swore he wouldn't give in to the greed and materialism that seemed to be hallmarks of his profession.

On a whim at an open-mic event in London, he performed a spoken-word piece he called "Goldman Rucksack," in which he recalled agonizing over whether to wear his backpack with the bank's logo facing inward, unseen, or facing out, prominently displayed. On his upcoming EP, the stripped-down track "Strictly For the Love" grapples with the same issue:

I'm on the path to being paid, that's how I gotta do.

Teach them to walk as both a prince and a pauper too.

Since that open-mic night, Bowes-Little has been performing to larger crowds and recording in the studio, still keeping his two worlds separate. Professionally, he says, "I had to put on a certain kind of face to be taken seriously by my clients, my superiors, and my peers. An African American trader who is also a rapper? That's too much of a cliché." So he developed the persona of Metis, named after the Greek goddess of wisdom, someone who, Bowes-Little says, "focuses on that which is essential and is not distracted by the superfluous." In French, m√©tis also means "mongrel"—a person of mixed race.

After seven years with Goldman Sachs, Bowes-Little quit in January to focus on his music, book, and film projects. When his music career took off, he says, "I had to look in the mirror and say, if [the job] really was a means to an end, and I've really found the thing that I'm passionate about, what's the reason to stay? I decided I was going to walk the walk and try to do what I love."

Appropriately, "The Path" is a mongrel of an EP. Metis owes much to such socially conscious hip-hop artists as Common and the Coup, but he is rarely preachy and doesn't sacrifice music to message. Metis stacks reflective tracks like "Strictly for the Love" alongside songs that seem tailor-made for the dance hall. In "All In," over an infectiously looped James Brown sample, Metis brags, My parents never went to college / I'm self-taught, self-made, and self-knowledge.

Reader Responses to His Double Life