The Author of Quilts

About ten years ago, Lucy Diggs found herself at loose ends. She'd published three moderately successful novels, but was now struggling to complete her fourth. "The energy wasn't there anymore," she says. "I had come to the end of the road in terms of writing." 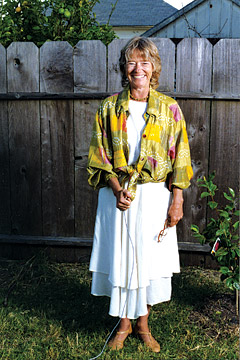 Courtesy Lucy Diggs
Lucy Diggs not only quilts, she mixes her own vegetable dyes.
She remembered that when she was a girl growing up in Tulsa, Oklahoma, her grandmother used to make quilts that Diggs loved to wrap around herself. She came to adore the feel and texture of them, which triggered a lifelong love of fabric. "Somewhere in the back of my mind," she says, "I always knew I would make a quilt."

Diggs headed to a fabric store near her home in northern California's wine country, purchased supplies, and got some tips from the store clerks. The next thing she knew, quilting had become a passion, if not actually an obsession. It is now her full-time job. Almost every day, she goes into her studio with its views of garden and forest, and she sews. She has published a book, Old Dyes, New Quilts, and recently set up a website, www.diggsdyeworks.com, where she sells her wares.

Quilting "is a lot like writing," she says. "There's the idea, and then there's the implementation." And once she gets going with the stitching, "It becomes like meditation," she says. "You can just get mesmerized doing it."

Diggs completed her first quilt within a few months, but found herself disappointed by the way it turned out. "It didn't measure up to my vision," she says. "I was disappointed."

After some thinking, she realized that her quilt didn't look like the antique ones she so admired in museums. Those quilts contained dye made from natural products. Diggs's cloth though came pre-dyed, and the dye was made from synthetic chemicals. So Diggs taught herself to make natural dyes. She learned to extract gorgeous blue dye from indigo, red from the roots of the madder plant, and yellow from the sawdust of the osage orange tree. She then mixed a combination of these three basic colors to create others. After a few trial runs, she became thrilled by how the quilts were turning out. Plant-based dyes "have that old-fashioned look," she says. The color is not as pure or perfect as the chemical dyes, resulting in a subtle variation that Diggs says makes the colors "rich in the way a gourmet meal is rich. All these different flavors go into it."

Though many quilters nowadays use machines and computers to design and stitch their creations, Diggs still prefers to make them by hand or use a standard sewing machine. She cuts out the individual pieces of fabric, stitches them together on a sewing machine, then creates what she likens to a sandwich—one large stitched-together piece on the front, cotton batting in between, and unbleached muslin for the backing. Everything then gets laid out on the floor and she hand-stitches intricate designs and patterns on the surface. She uses traditional designs—combinations of squares, triangles, rectangles, and diamonds arranged in repeating patterns. It can take her anywhere from six months to a year to complete.

She has given her quilts to her three grandchildren and close friends. She is now starting to sell them on the web, but she feels trepidation. "There is a disconnect between the amount of time it takes to make a quilt and the price you can charge the public," she says. "There's a part of me that would rather give the quilts to people that I know will love and appreciate them rather than make a penny an hour.-"

Reader Responses to The Author of Quilts