It's a long way from growing up the son of a butcher in new Haven, Connecticut, to becoming the 14th principal of Phillips Exeter Academy, the iconic New England co-educational boarding school. But it's a journey that Tom Hassan says he could not have made without his experiences at Brown. 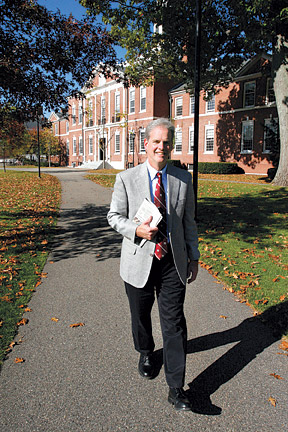 Art Durity
Tom Hassan has made his home at Philips Exeter.
Hassan says that his introduction to private schools came when as a young man he read A Separate Peace: "I thought, 'Hey, kids actually live with teachers,' and I was just totally intrigued by this, even though my life was centered on public schools." This vision of the closeness of teachers and students led to his choice to attend Brown. "I always knew," he says, "that I wanted to teach, and I chose Brown so I could choose my own major—math, English, and education—and earn my teacher certification, though there were only a few of us."

After graduation, Hassan landed a job in the admission office, which introduced him to the world of independent schools. "For two years I'm traveling around the country and getting a look at all of these independent school campuses," he recalls, "and so this independent boarding school thing really gained more traction, and I began to think, 'This is something I really want to do.'"

In 1984 Hassan earned a master's degree in education from Harvard, and, after a stint as assistant dean of freshmen at Harvard, joined the Phillips Exeter faculty in 1989. He soon became director of college counseling and, eventually, assistant principal. He became principal, the school's highest administrative post, at the end of the 2008–09 academic year.

Though Hassan kept one foot in the classroom, his administrative achievements have helped Exeter evolve with changing times. Among his proudest accomplishments so far have been the move to increase racial and ethnic diversity among students and faculty, and the adoption of need-blind admission, through which students from families earning less than $75,000 a year attend the academy for free and those with incomes above that pay on a graduated scale.

"It is pretty bold to say that Exeter is free for families that earn $75,000 or less, and it was important for us to make that statement," Hassan says. "This ethic, that Exeter should be open to all students, is in the school's charter. It's in its DNA, and so for Exeter it has always not been about the money; it's about academic strength."

His next goal is to build stronger connections between the campus and the outside world by providing opportunities for teachers and students to connect with their peers throughout the world.

"One of the issues that for me is so important," he says, "is how does a school like Exeter contribute and happen on the global stage? How do we connect our students and teachers to life, as our kids so often call it, beyond this wonderful bubble here."

Reader Responses to The Principal