To Belong Is to Live

Latin America's premier female writer, Clarice Lispector, spent most of her fifty-seven years in Brazil, where she is a cult figure affectionately known today by her first name alone. Although Clarice's major works have been available in English translation for many years, that cult will undoubtedly receive a boost in North America with the publication of the first biography of her in English, Benjamin Moser's superbly documented, meticulously researched Why This World. 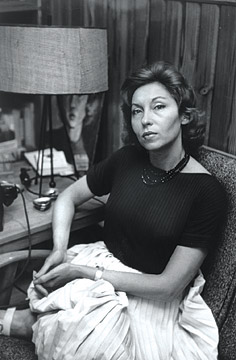 However beloved by her readers, Clarice Lispector, who died in 1977, always felt herself an outsider, and themes of belonging and not-belonging pervade her work. Moser was able to uncover intimate and never-before-revealed details of her life, allowing him to connect Clarice's personal experiences of otherness with her writing. Her family, Jewish refugees from the Ukraine, fled to South America after World War I, and Clarice was born en route. Her mother died when Clarice was nine, and she grew up in Brazil, in the anti-Semitic atmosphere of the Vargas dictatorship of the 1930s.

Although her first novel, the 1943 Near to the Wild Heart, was acclaimed for taking Brazilian literature to uncharted heights, after Clarice married a Brazilian diplomat she traveled widely and had to struggle to find time to write. Moser compassionately chronicles the births of her two boys (one of whom would later be diagnosed with schizophrenia), her return to Brazil after separating from her husband, and her premature death from cancer. He tells Clarice's story with the sensitivity of a literary critic and the breadth of a seasoned social historian.

Clarice repeatedly stated that, for her, writing was a quest, and her art represents her inner journey through language, thought, emotion, and meditation. She sought not only self-knowledge but transcendence — unquestionably toward an inscrutable and unattainable God similar to the "unsayable" Divine of her Jewish heritage. Although not religious, she had a mystical bent bordering on Kabbalistic and Talmudic intimations, and Moser reveals existential and aesthetic dimensions unknown even to her devoted readers.

Similarly, although Clarice's prose rarely refers overtly to Jewish culture or religion, Moser treats her ethnic experience as integral to her development as a human being and a writer. Focusing on her strong Yiddishkeit family life as a child and on the bruising loss of her mother, Moser rightly underscores the theme of "belongingness." He shows the impact of displacement and fracture in diasporic existence, and the void Clarice experienced as a motherless child. 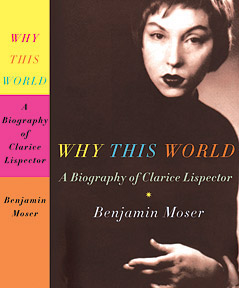 Moser draws on Clarice's fiction to explain her philosophical stances, and quotes from her correspondence to sisters and friends to document her family life. To relate her world views he cites a column she wrote from 1967 to 1973 for a major daily newspaper in Rio de Janeiro. These brief conversational pieces, at times mere aphorisms, appeared each Saturday like a running conversation and brought Clarice closer to a reading public who grew to appreciate her singular way of thinking and writing, which invariably evoked their own doubts, failures, and insecurities.

In a famous column called "Belonging," she wrote: "Over the years, especially of late, I have lost the knack of being like other people. I no longer know how it is done. And a new kind of 'solitude through not belonging' has started to smother me like ivy on a wall." However, in spite of her intermittent solitude, she stated joyously toward the end of the piece: "And then I discovered that: to belong is to live."

Felicitously, Moser's biography brings Clarice Lispector to life and, in so doing, invites readers to belong to her world of vision and spirit.

Nelson Vieira is professor of Portuguese and Brazilian studies and Judaic studies.

Reader Responses to To Belong Is to Live