"It's a big, fat book. You can use it as a doorstop," Gordon S. Wood quipped at the October 15 launch party for his newest tome, Empire of Liberty: A History of the Early Republic, 1789–1815. Wood, a professor emeritus of history, was addressing a group of friends and colleagues in the reading room of the John Carter Brown Library (JCB). 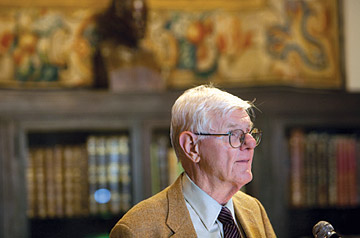 Scott Kingsley
"We need a little humility" was one of the lessons of history Gordon Wood underscored during his appearance at the John Carter Brown Library in October.

His editor at Oxford University Press, Susan Ferber '93, disputed his appraisal. "It's actually quite svelte," she said, "compared to the other books in the series."

Wood's 700-page Empire of Liberty is the second volume in the Oxford History of the United States, which is aimed at the general public as well as scholars. JCB director Ted Widmer pointed out that three books in the series are by a Brown faculty historians: James T. Patterson, also emeritus, contributed two volumes focused on the twentieth century. "Three out of eight," Widmer joked. "Brown has more or less a lock on the series."

Ferber noted that the publisher had first contracted with Wood to write about the early years of the republic way back in 1980, and Wood looked a little shocked that so much time had passed. His Pulitzer-winning Radicalism of the American Revolution came out in 1993.

Wood gave his audience a whirlwind tour of his new book, which begins with Washington Irving's tale of Rip van Winkle awakening after a twenty-year nap to find his once-lazy village bustling and filled with Babylonian chatter about liberty and other foreign concepts. America's transformation in those first decades was the greatest in history, Wood said, and "people came to not only expect change but to prize it." The U.S. population grew twice as fast as Europe's, and Americans rapidly became "perhaps the most commercialized people in the world," Wood said.

Wood portrayed the period as one of the most violent in U.S. history. Students ran wild on college campuses. At Dartmouth, he said, they demanded beer: two or three pints a day. At Brown, rioters forced President Jonathan Maxcy to sign a treaty. At Princeton, Nassau Hall was burned.

A quarter century into the nation's history, the founders were disillusioned, Wood said. They had thought their new nation woud be able to coexist with the native peoples and that slavery would simply disappear. Instead, their ideals had given way to crass commercialism and anti-intellectualism.

"I think we need a little humility," Wood concluded. "The past shows you that people go wrong and we can go wrong, too."

Reader Responses to The Big One