In 2004, Sarah Havens was a mere second-year associate at the New York–based Allen & Overy, only a few years out of Georgetown Law School, when her firm elected to represent eight Guantánamo detainees. Normally, she would have been considered too inexperienced for such important cases, especially since her focus up until then had been entirely on corporate law. 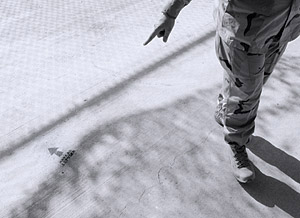 Photo by Mark Wilson/Getty Images
An arrow in the recreation area indicates Mekkah for the prayerful.
But as an international relations concentrator at Brown, she had studied Arabic and had spent her junior year at the American University in Cairo. Though her time overseas had been difficult for her at first, she had grown to feel comfortable in Egyptian culture. She appreciated, for example, the importance Egyptians placed on hospitality, especially toward newcomers.

"I found it to be an incredibly comfortable and warm place," she recalls, "and I came to feel at home there." She returned to spend another year in Cairo after graduating, taking a job as an intern at American University.

Her language acumen and her knowledge of Arab social mores now made her a valuable asset at Allen & Overy. Defense lawyers brought their own interpreters, but Havens listened in to make sure there were no mistakes or misunderstandings. She also explained to her colleagues the importance of being an excellent host in Arab culture. "It's your obligation to put out a nice spread," Havens says. Some of the detainees saw themselves as hosting the lawyers when they visited and expressed embarrassment that they had no food to offer. Havens deftly turned the situation around. "We're the ones hosting you," she told them. She then made sure her fellow attorneys always brought along food for their clients.

Havens says many detainees were uncomfortable having a woman as their lawyer. "They had never had a professional relationship with a female before," she says. She soon found a way of turning this into an advantage, however. "I'd mother a lot of my clients," she says. "To have a woman come in and bring hot tea and express sympathy can be very comforting."

Havens has gone on to be involved in almost every aspect of her firm's Guantánamo cases. She's helped to write briefs, visits the detention center frequently, and appears in court. To work on cases like these, she says, "is kind of like a dream come true."

Havens and her firm still have eleven cases pending in Guantánamo.

Reader Responses to Tea and Sympathy