Best Seat in the House

When he was a kid growing up in Providence, Clark Sammartino worked for his cousin Joey Angelo, a world-ranked boxer, helping to care for him in Angelo's corner of the ring. Once when Angelo traveled to Portland, Maine, to box in a featherweight bout against a local champion, he was worried that he'd become too heavy to qualify for his weight class. "Lift up my arms a little," Angelo told his young apprentice as he stepped on the scale. Sammartino followed orders and the slight lift off the scale managed to bring Angelo in under the weight limit. "Here I was 10 years old," Sammartino recalls, "committing a crime." 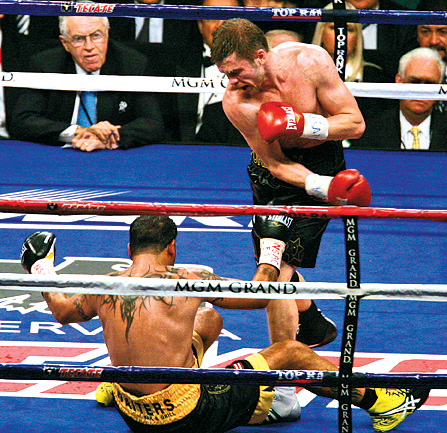 Eric Jamison/AP Photo
Clark Sammartino (top left) scores the WBA super-welterweight championship in Las Vegas, November 14, 2009.
Today Sammartino is a boxing judge, and ironically helps make sure the rules are followed inside the ring. Since he started in the early 1990s, he has judged championship bouts all over the world. He sits ringside with two other judges—"the best seats in the house," he says—and has scored such fighters as Mike Tyson, Evander Holyfield, Antonio Margarito, and Oscar De La Hoya. "There's nothing more exciting than a world-championship fight," Sammartino says. "It's electric."

Sammartino grew up in Providence back when the National Boxing Association (now the World Boxing Association) was still headquartered there. He says Providence was then a great boxing town, with regular bouts held at the Acadian Ballroom and the Rhode Island Auditorium. He recalls seeing Rocky Marciano fight. And he himself boxed with the Police Athletic League in his teens, but gave it up when he arrived at Brown, where he majored in biology and ran track. A few years after graduation, Sammartino set up shop as an oral surgeon.

Then, in the early 1970s, one of his patients, a local boxer, coaxed Sammartino back into the ring. After several months of training, he fought one match, and won in four-rounds. But then he was told he would next face a real bruiser of an opponent, Bruno Schultz. Almost immediately, Sammartino announced his retirement. "There was no way in the world I was going to get in the ring with Bruno Schultz," says Sammartino. "That was the end of that career."

A decade later, a childhood friend from Providence became director of Rhode Island's department of business regulation and asked if Sammartino would like to do some boxing judging. Sammartino started working fights at the Foxwoods Resort Casino in Connecticut and venues in Worcester and Lowell, Mass. He quickly earned a reputation for impeccable fairness and objectivity and began judging all over the world.

Sammartino remembers one tournament in Ireland where a local fighter was up against an English champion. Nationalistic passions between fans ran high and, "the fight was as close as a whisper," Sammartino recalls. After two of the judges' scores resulted in a tie, it was up to Sammartino to cast the deciding vote. When he gave the English fighter a one-point victory over his opponent, the 25,000-fans went wild and "a minor riot erupted," Sammartino says. "I got out of there as quickly as I could."

He now judges forty-some bouts a year, five of them world championships. He balances judging with his day job at Blue Fin Capital, an investment advisory firm in Providence. (He retired from oral surgery in 1993.) Sammartino says fighters today are as good as those he loved as a child, but the sport itself has changed. Boxing icons no longer capture the public's imagination. Many fans have deserted boxing for extreme fighting, which Sammartino says is brutal.

Reader Responses to Best Seat in the House