When she became pregnant for the first time in 1997, Marlena Schoenberg Fejzo found it impossible to keep any food down. She vomited frequently, and felt so nauseated she had to spend weeks lying in bed. Just a bad case of morning sickness, she thought, and when her symptoms subsided after the first trimester, she gave birth to a healthy baby boy. 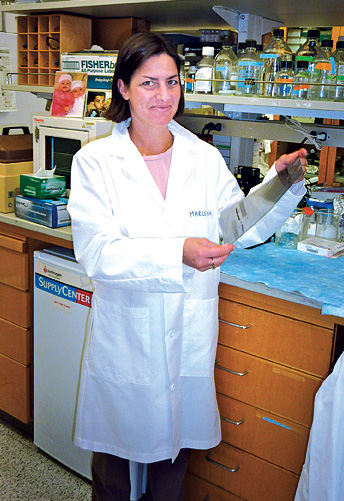 Two years later, she was pregnant again, and this time felt much worse. She vomited any food she ate. She developed hypersalivation and Fejzo says she began drooling "like a rabid dog." She foamed at the mouth, she recalls, as if she'd been poisoned. At fifteen weeks, she miscarried. "I was basically starving to death, because I couldn't keep anything down," she says. "It was hell." Fejzo was diagnosed with hyperemesis gravidarum (HG), a severe form of morning sickness that afflicts around one percent of all pregnant women. Its root cause remains a mystery.

As it happened, Fejzo is a biologist who studies women's diseases. At Brown she concentrated in applied mathematics, but when she took a course in genetics, she says, she switched gears: "I knew right away I wanted to be a geneticist." She earned her PhD in the subject from Harvard and played a major role in the discovery of the gene linked to uterine fibroids. She did her postdoctoral work on breast cancer, but after her miscarriage she decided to focus also on HG.

"I discovered that research had completely stopped on HG," says Fejzo, who is now a faculty researcher at the University of Southern California and UCLA. The explanation for this went back to the late 1950s, when women with severe morning sickness were treated with thalidomide and gave birth to babies with limb deformities. After that, Fejzo says, pharmaceutical companies generally steered away from morning sickness treatments.

Fejzo started her research by posting an online survey asking women who'd had HG if other members of their family also suffered through it. Working with her brother, Rick Paik Schoenberg '93, a UCLA statistician, she found that 20 percent of the respondents had sisters and 30 percent had mothers who'd experienced HG. "From a geneticist's point of view," Fejzo says, "that suggests there's a pretty strong genetic component to this. That means we can find the genes which predispose people to this illness."

Fejzo has now moved on to a much larger study in which she plans to collect DNA samples from 1,000 women. She suspects that HG's causes will prove similar to those of normal morning sickness and are in some way related to the hormones involved in reproduction. Her research could also lead to a treatment for the illness. Right now doctors prescribe drugs that have not been approved for this use by the Food and Drug Administration. This is perfectly legal, but it also means there have been no studies of the drug's safety, effectiveness, and impact on the fetus.

"If I don't do it, there's nobody out there who will," Fejzo says of her HG research. "I don't want anyone to suffer like I did."