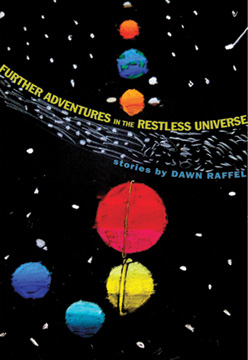 Writing at the edges of literary genres can create fresh angles of vision, or it can leave a reader feeling confused and betrayed, as in the case of recent memoirs that have turned out to be not so much remembered as invented.

Dawn Raffel's stories are sharp bursts of experience compressed onto the edge between poetry and prose. Her new collection, Further Adventures in the Restless Universe, includes twenty-one stories, some shorter than this review. The book takes up barely 100 pages. Yet Raffel, a book editor at Reader's Digest and a BAM board member, conjures a surprisingly spacious world in those few pages.

Set largely in Illinois and Wisconsin, most of these stories are narrated by a woman who describes her interactions as mother, wife, sister, and daughter in brief anecdotes constructed mostly of simple declarative sentences. At first this hyper-minimalist approach seems willfully confining. But as characters, details, and even lines of dialogue migrate from one story to another, a deeply felt and finely observed world emerges.

In "Her Purchase," a slightly harried mother is on a road trip with her seven-year-old son to visit what appears to be Chicago's Museum of Science and Industry, recalling all the little things she has taught him: the story of "Hansel and the other one" in their gingerbread house, the phrases from nursery rhymes. As the boy speaks, "She taught him that" becomes the story's refrain, yet at the same time the mother already feels her son pulling loose: "So much he will own," she thinks, "will bear about his person, that she will not choose." As they sit together in a restaurant having breakfast, the mother points out a smear on the window where a bird has flown into the glass. The boy wants to know about it, but only later, at night in the motel when she knows he is asleep, does she tell him: "Perhaps ... the bird will do anything to get at something sweet." Later, the boy, still thinking about the bird, asks his mother, what if "they could open the windows all over the world" and save it.

This futile yearning for something sweet, for connection and, ultimately, love, is at the heart of these stories. In "The Myth of Drowning," told entirely in dialogue, a husband repeatedly asks his wife, "What are you thinking?" "Nothing," comes the answer, and as the conversation circles and goes seemingly nowhere, the need to know another human being runs up against basic human unknowability. When the son in "Her Purchase" tells his mother he's lonely, she dutifully tells him to wipe his mouth, and in the next breath says, "And how can you be lonely when I love you so much."

The great obstacle to love in these stories is the restless universe of the book's title. These are stories of missed connections within an inexorable cycle of parents dying, children growing up, and sisters drifting apart. In "The Interruption" a telephone conversation between two sisters ends abruptly after the call waiting signal becomes insistent. In "Seven Spells" the narrator describes the death of her father (who has lost a book titled The Restless Universe). A lover of science, he once told her that "the infinite ... is in the infinitesimal," which could be an epigraph for Raffel's book:

"My father sits down swiftly, surprisingly gracefully, witnesses say, while dancing, and never gets back up. When I call the house, I get his voice on the machine but the body is elsewhere, in storage, is ash." In "The Air and Its Relatives," the same father, visiting a science display with his daughter, can't stop talking about the wonders before them. "He wanted to linger," she notes. "Me, I can't bear to be anyplace, ever, so close to closing."

Despite the missed connections, the narrator of these stories clings to hope. Contemplating her mother's death in the collection's final story, she thinks, "A foregone conclusion, Mother would say. The heart is a pump. In the end, it quits.

"I will speak for myself: There is no end.

"I am calling and calling.

"The candles are lit."