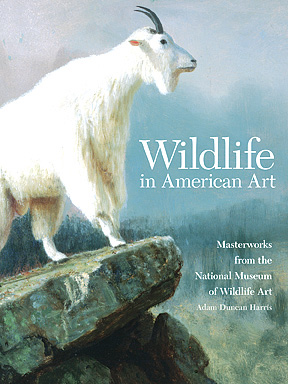 Art historians often sniff at wildlife art, dismissing it as mere illustration or, worse still, kitsch, says Adam Duncan Harris'92, curator of art at the National Museum of Wildlife Art in Jackson,Wyoming. "People tend to think of a white wolf, airbrushed on canvas," he laments. Harris shatters those stereotypes in the book Wildlife in American Art, published by the University of Oklahoma Press. Drawing on the museum's holdings—from Native American birdstones to Warhol lithographs—the book explores the tension between natural history, illustration, and fine art. It includes the meticulous observations of John James Audubon, Charles Livingston Bull, and illustrator Rockwell Kent, whose painting of Mt. Equinox is distinctly modernist: as concerned with color and shape, as it is with accuracy. Gerard Curtis Delano's 1940 Forest Primeval of a bull elk drinking from a cold Colorado lake, shows "the power and mystery of the wilderness rather than showing a literal depiction of it," Harris writes. In Maynard Dixon's Eagle's Roost, the massive rock forms, horizon, and weighty clouds dominate the wildlife. "These paintings represent something beyond our knowing,"Harris says. "They can serve as a palliative to urban life."