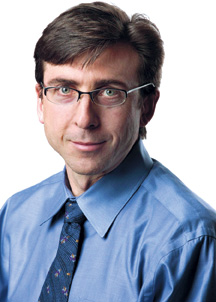 WHAT I REMEMBER MOST ABOUT BROWN Funk Night

BAM Tell us about the technology you're developing.

BM We build solar energy systems that use photovoltaic (PV) cells to convert light into electricity. Traditionally, silicon is used to make the cells. We use more readily available materials such as steel. It reduces the cost of the PV cells by 80 to 90 percent.

BAM Your company just received a $3 million contract from the federal government as part of President Obama's stimulus plan. What's it for?

BM It's aimed at accelerating the production of Skyline's technology by at least a year. We're looking to bring the cost down and produce in volume.

BAM So when will it be ready to deploy?

BM We actually announced commercial production in the fourth quarter of last year. A small town in California—it's very progressive—wanted to be able to save money on its utility, bill and we told them we would be able to do that with this system. Once we complete the installation, a significant amount of the town's energy will be coming from the sun.

BAM So this is primarily for municipalities?

BM Actually, one of the unique aspects of photovoltaic technology is that it can really be deployed in scales that are as small as a residential rooftop or a calculator all the way up to a solar power plant located in the middle of no-man's land. That being said, our technology is best suited for large-scale applications such as powering a municipality or large business.

BAM This may all be some time off in the future. What can you do now if you want to get in on the solar power revolution?

BM In states like New Jersey, California, Colorado—to name just a handful—it's easier than ever to use solar power because you don't actually have to write a check for the equipment. All you need to do is agree to buy the power from a solar energy company, and they come and install the hook-up for you. You save money and do the right thing.