With reading on the decline, independent bookstores nearly all gone, and book sales falling, three publishers from small independent presses came to campus in March to affirm, well, that there are still some serious readers out there. 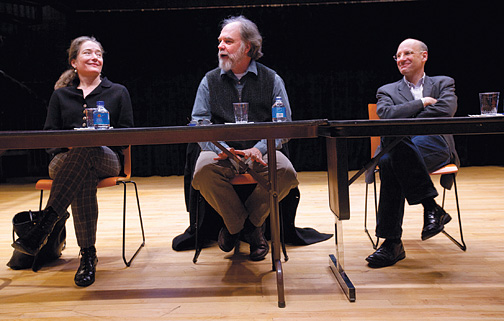 Scott Kingsley
Publishers Babara Epier, Steve Clay, and Edwin Frank, left to right, discussed the future of printed books. "There's a hole in the bottom of the boat that wasn't there before," Epler said.
Barbara Epler, editor in chief of New Directions, put the number at "at least 100,000 core serious readers." "I still think there's a book culture here," she added. "It's just not as big." She bemoaned the loss of the intellectual Susan Sontag, who died in 2004, saying she had the clout and public standing to bring little-known authors from around the world to the public's attention.

To give some perspective on literary fiction's current plight, Edwin Frank, editor of the New York Review of Books Classics series, said a reprinting of the 17th-century medical manuscript, The Anatomy of Melancholy, had done "spectacularly well." Asked by the other panelists what this meant precisely, Frank said it had sold 12,000 to 13,000 copies. Epler, who is credited with introducing the authors W.G. Sebald and Roberto Bolaño to American readers, replied, "Wow, that's a lot."

Sales have been further eroded by the ubiquity of used-book sellers on the web. It's now possible to find books from the panelists' catalogs for as little as a dollar. On top of this are e-books, which go for as little as $10 for a best-seller. "There's a hole in the bottom of the boat that wasn't there before," Epler said. "That's a real loss of income, and it's not clear what you can do."

The third panelist was Steve Clay of Granary Books, a publisher of high-quality artists' books. He recalled when his company, a one-man shop with subcontractors, put out a full catalog of books every year. Now he publishes two books per year, both limited editions.