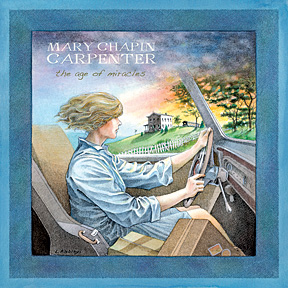 April 27 was a banner day for five-time Grammy winner Mary Chapin Carpenter '81: Rounder released her thirteenth album, The Age of Miracles, and that night she was honored with the "Spirit of Americana" Free Speech in Music Award at the Newseum in Washington, D.C. It was a turning point for Carpenter; three years ago, as she prepared to launch a national tour for her album The Calling, she was hospitalized with a life-threatening pulmonary embolism. She fell into a deep funk, she told NPR's Diane Rehm, and "It took a long time to come out of that dark place." The Age of Miracles is the story of her resilience. "One day you'll get up that hill," she sings, "in the age of miracles."

Some fans may miss the wild young thing who whooped it up "Down at the Twist and Shout." At midlife, Carpenter is more reflective. But she still has a distinctive perspective on the vicissitudes of love. Her midlife rejoinder to her 1992 hit "He Thinks He'll Keep Her" is "I Put My Ring Back On," a nuanced duet she sings with Vince Gill.