It was late March, and Brendan Whittet '94 was talking a mile a minute. Words like excellence and passion tumbled out in an exuberant riff on his first season as head coach of men's hockey. 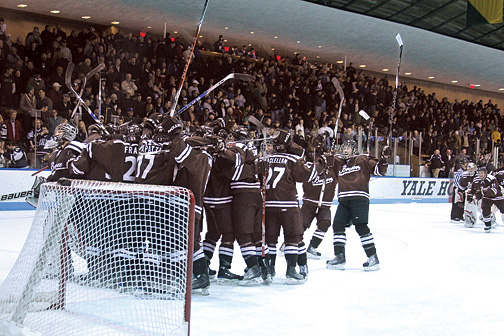 David Silverman
The Bears celebrate after beating Yale to face Cornell in the ECAC Championship tourney.
"We had to learn how to win," he said. "We already had some really good hockey players, but they were mentally beat-up. I tried to attack this attitude from day one." He paused to take a breath and laughed.

It had been a Cinderella season. The Bears began in the ECAC cellar and ended up facing Cornell—ranked seventh in the nation—in the ECAC championship semifinal game at Albany in March. In their preseason poll, coaches had chosen Brown to finish last in the league, where they'd ended the year before with a 3–15–4 record. To make matters worse, the team's leading scorer, Matt Vokes '09, had graduated. Attendance at Meehan Auditorium had dropped steadily.

Enter Whittet, a can-do ball of fire with gingery hair to match. A former Brown defenseman who'd played in the ECAC final four in 1993 and 1994 and in the NCAA tournament under coach Bob Gaudet in 1993, Whittet had most recently been Gaudet's assistant at Dartmouth, winner of the 2006 ECAC title.

Fans were skeptical that Whittet could turn around a losing program. The returning players, Whittet said, "expected bad things to happen. Their experience was that if we got down by a goal or two, we'd end up down four or five goals. They had no confidence that we could come back from a deficit."

But by early December a funny thing was starting to happen on the ice. The previous month, the Bears played a close game against league-leader Yale, coming back from a 4–1 deficit and forcing the Elis into overtime before Yale prevailed, 6–5. Although it went down as a loss, after last season it felt like a win, and spirits rose. The Bears built momentum by sinking nonleague opponent UConn, 8–1, at home, and beating Harvard, 4–1; Princeton, 3–1; Quinnipiac (ranked fourth nationally), 2–1; and nonleague American International College, 5–2.

In January, the Bears returned from winter break and lost three league games in a row. But on January 23, the Bears beat Clarkson, and RPI and tied Union. Fans began returning to Meehan, and Whittet welcomed them. "My goal is to have Meehan sold out and rocking every time we play," he said.

The team finished the regular season in eleventh place in the twelve-school ECAC, and hit the road to face the sixth-seed, RPI, in a best-of-three first-round playoff. That's when the miracles began. The Bears won the series in three games, then advanced to the quarterfinals against Yale, sixth in the nation and number one in the league.

In New Haven, Brown stunned the Elis by taking the series (3–2, 3–6, 1–0) and moving on to the semifinals against Cornell in Albany. Sportswriters were agog: "Brown is crashing the ECAC Final Four party," wrote Tim Wilkin in the Albany Times-Union. He quoted senior cocaptain Aaron Volpatti: "I would just say, 'Watch out.' We're not the same team we were earlier this season."

In the end, the miracle stopped one game short: Cornell prevailed, 3-0, but in the consolation game the Bears trounced St. Lawrence by the same score to finish third in the tournament.

Heroes of the postseason included goalie Mike Clemente '12, who stopped eighty-two of eighty-nine shots in the opening-round games against RPI; Aaron Volpatti '10, a rugged, hard-checking forward who was a finalist for the ECAC's Best Defensive Forward Award; and forward Jack Maclellan '12, who scored the winning goal in Brown's decisive playoff victory over Yale.

In fact, almost every returning player this year achieved career-best performances. Senior tricaptains Devin Timberlake (playing now for the AHL Providence Bruins), Aaron Volpatti, and Jordan Pietrus (who missed half the season due to an injury) nearly doubled their entire previous college career scoring. Harry Zolnierczyk '11, an explosive forward who had been held to only five points in his first two seasons, sparked the offense with thirty-one this season.

Jesse Fratkin '11 got little ice time his first two years, but this season he scored six points in two November games to win ECAC Player of the Week honors. Goalie Clemente was named Inside College Hockey's National Player of the Week in early December after stopping 100 of 103 shots in three Brown victories. And Maclellan, hero of the Yale quarterfinal win, had only six points as a freshman but was this year's leading scorer with thirty-three regular-season points. "Many [players] improved their numbers so dramatically," wrote a reporter at USCHO.com. "One has to think it must be the coaching."

"These are guys with grit," Whittet said after the ECAC tournament, deflecting credit to his players. "We didn't have a lot of depth, and we had to play the same lines over and over.

"Getting to the semifinals and winning the consolation game was a great step," he continued. "But my goal isn't to go 13–20 [as the Bears did this year]. When I started last fall I told the guys we would try to win the national championship, and that's what I intend to do."