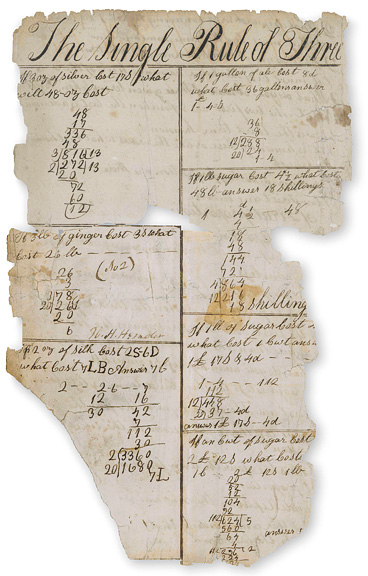 As a teenager, Abraham Lincoln stitched together paper to make a notebook for his studies. For nearly a century, the two halves of one of its pages have been housed 1,500 miles apart, in Brown's John Hay Library and at the University of Chicago. Until this spring no one knew they were parts of a single whole.

The man who connected them is Daniel Stowell, editor of the Papers of Abraham Lincoln, a project of the Lincoln Presidential Library and Museum in Springfield, Illinois. Since 2006, Stowell and his colleagues have been crisscrossing the country to digitally scan more than 57,000 Lincoln documents. In the process, he noticed how similar were the Brown and Chicago page fragments on which Lincoln had worked out his sums.

The two scans line up perfectly along the tear. In the right-hand column, the top half of the numeral 18 is on Brown's half, and the bottom is on Chicago's. On the back, Stowell found the abbreviation £ bisected perfectly.

Seen whole, the page gives a clearer sense of what Lincoln was doing: copying problems from a popular textbook. He received perhaps a year of formal education, says Holly Snyder, curator of U.S. history at the Hay. The exercise, she notes, says something about Lincoln's "drive to learn."